The Big Show came to Colorado last weekend, and though current Colorado Cross Cup leader Carlos Casali continues to recover from a couple recent crashes, and the rest of Team Gates Carbon Drive is recovering from the big muddy trip to Seattle, everyone showed up ready to rock! And rock they did. By the end of the weekend the team had extended its lead in the Team Cup race, and Carlos had done the same in the individual competition.

Saturday’s Colorado Cross Classic was located at the Boulder Reservoir. Even though it’s flat, the reservoir always makes for a tough course with its combination of bumpy grass, long sandy run-ups and lack of spots to rest. The race course was thronged with spectators and the field of competitors was large as action got underway. After some twisty grass sections, there were several dusty corners leading into wet sand and then more dry sand followed by a hairpin turn and a set of barriers. Talk about grueling! That final sand section meant a long run for the singlespeeders, followed by a fast paved section and more twisty grass corners that required massive power output and cornering prowess. 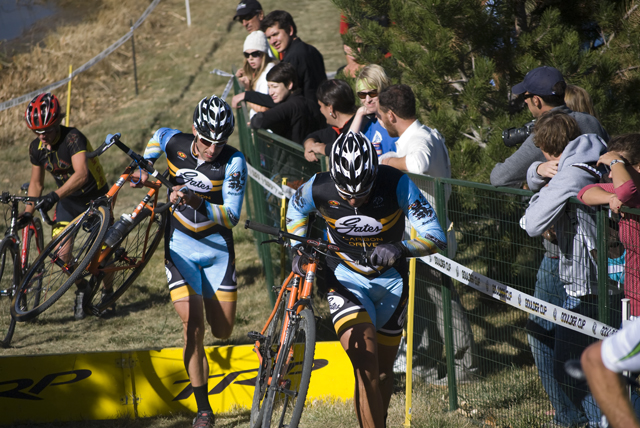 Team Gates Carbon Drive members Derek Strong, Carlos Casali and I lined up with 20 other riders for the start. Carlos and I got out to a fast start, despite new course rules that gave everyone less warm-up time on the course. A sole rider got away early as Carlos and I traded back and forth in the chase to keep him within reach. That was until I took a corner too hot and clipped a hay bale, causing my front wheel to slide out at high speed. I jumped back on and hammered to make up for the lost seconds as Derek came around me and joined Carlos in the leader chase. Derek and Carlos closed the gap but the leaders rode strong and managed to hold on for the win. Derek finished a strong 4th with Carlos right behind in 5th. Not content with my first crash, I managed to shoulder-check some steel fencing (just to show it who was boss) and rode across in 8th. While not atop the podium, all three of us were satisfied. 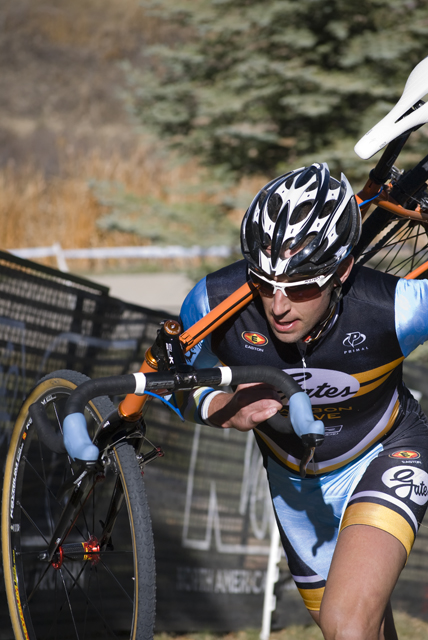 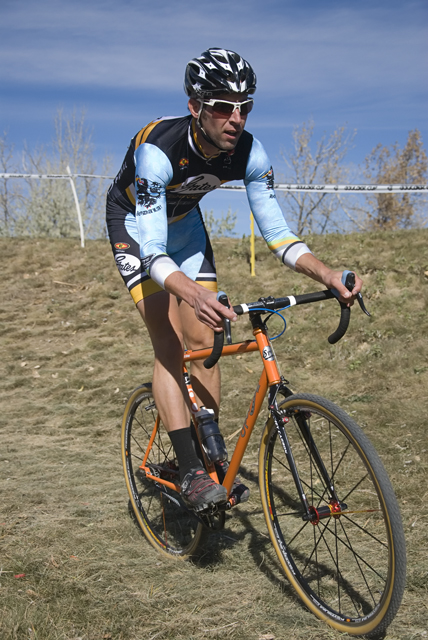 Sunday’s Boulder Cup CX race was another NACT event on a new course located, of all places, at the mall! There was no time to hit the food court though, as this was one tough mother. Derek Strong, Carlos Casali and I toed the line as part of a 25-man field. Unfortunately, Garrett “big huck” Davis crashed during warmups and ended up in the emergency room. Garrett’s prognosis looks good and he should be back on the bike in a few weeks. Get well buddy, we need you for State Championships!

Once again the race was fast right from the start with a small group separating from the others including Derek and Carlos. Derek rode each lap faster and was reeling back the leaders but he ran out of road. He lunged for the line with the second-place rider, grabbing third place while getting the same time as the second-place rider. No doubt, the race leader was glad the race ended then because Derek was on the hunt! Carlos finished in a solid 5th.

While the team rode strong, the Carbon Drive again stole the show. I saw multiple riders struggling with derailed chains and sand in their drive trains, but the belts ran flawlessly. Next weekend, Team Gates Carbon Drive will be racing at the Boulder Reservoir again on Saturday. Sunday, the team heads south of Denver to a new venue at the Castle Rock Rhyolite bike park. Come out and enjoy the action, and check out Carbon Drive in action!