Boo Belts out a Victory in Crusher in Tushar

Boo Bicycles’ bamboo and carbon fiber race bikes have won many accolades for their beauty. With Brad Cole’s victory in the grueling 80-mile Crusher in the Tushar endurance race, which featured a whopping 10,000 feet of climbing, Boo has confirmed that bamboo paired with Gates Carbon Drive also means fast. Riding a belt-drive rigid fork singlespeed Boo 29er, Cole took took first in the singlespeed division of the Utah race. Cole even powered through much of the pro field, passing geared competitors, to take a top 15 finish overall. Cole was running the new46/30 CenterTrack system from Gates. In addition to the Gates drive, Cole’s bike is one of the most innovative bamboo 29ers ever built, featuring a Niner carbon fork, TRP Dash Carbon brakes, prototype Challenge tubular tires, and a number of Chris King goodies. Read Boo founder Nick Frey’s writeup about Cole’s 29er and see more pictures of the bike here. 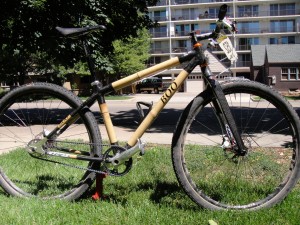 In addition to Cole’s victory, Boo’s Tyler Wren bagged first place in the pro men’s open category riding on a geared bike. “The Crusher in the Tushar is now officially on the map,” saysBoo founder and pro racer Nick Frey, “and I’m very proud to see Boo at the top of two of its podiums.” To learn more about Boo’s manufacturing process and bamboo (It’s a grass!), watch this video of builder James Wolf crafting a Boo frame by hand in his workshop in Vietnam. https://www.youtube.com/watch?v=kk0h8kYuZO4