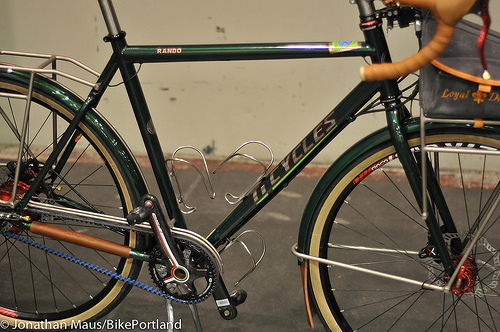 “Randonneur cycling combines the love of travel with the enjoyment of physical exercise.” So says Jan Heine, the editor of Bicycle Quarterly, a magazine devoted to the art of long-distance, off-the-beaten-path endurance cycling. So what does a randonneur bike look like? 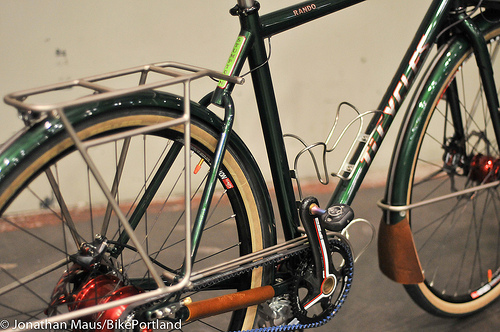 Dave Levy of Ti Cycles in Portland provided an excellent example with his “Rando” bike on display at the 2012 North American Handmade Bicycle Show. The bike is outfitted with racks and fenders for staying dry and carrying the necessary gear for a multi-day journey of several hundred miles. Jonathan Maus of BikePortland.org, who provided the photographs for this post, described the Rando as “a cornucopia of custom.” Highlights include hydraulic disc brakes, a Gates Carbon Drive, 14-speed Rohloff hub and customized Rohloff shifter, an iPhone mount, internal wiring, a USB mount on the headset, dynamo hub lights, battery backup for a GPS unit, and more. Call it a modern twist on an old style of bike. 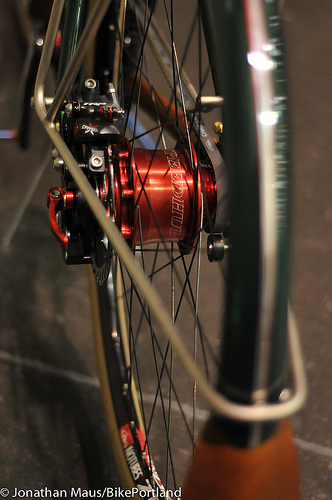 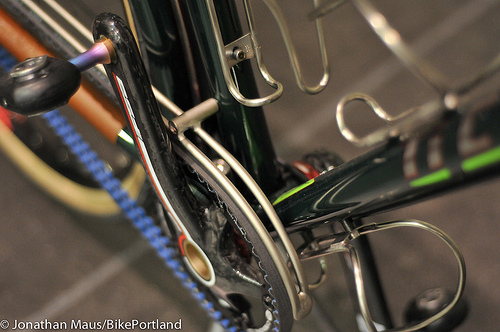 Judges in the Gates Carbon Drive innovative belt drive bike design contest at NAHBS awarded the bike a Bronze Sprocket, for third place and $2,500 of free Carbon Drive systems. The customer who bought the bike from Levy plans to race it in Paris-Brest-Paris, the world’s best-known randonee. The customer specifically requested the bike include a belt drive and internally geared hub for low maintenance. Begun in 1891 and believed to be the oldest bicycle event still in existence, the 1,200 km course of Paris-Brest-Paris travels between the two French cities. Randonneuring has its roots in Europe but is increasingly popular in North America, where the 1,200 km Boston-Montreal-Boston is the best-known randonnee. Learn more about randonneur bikes from a former piece that was written in Bicycle Quarterly. And if you’re randonneuring on a bike with Gates Carbon Drive, let us know.