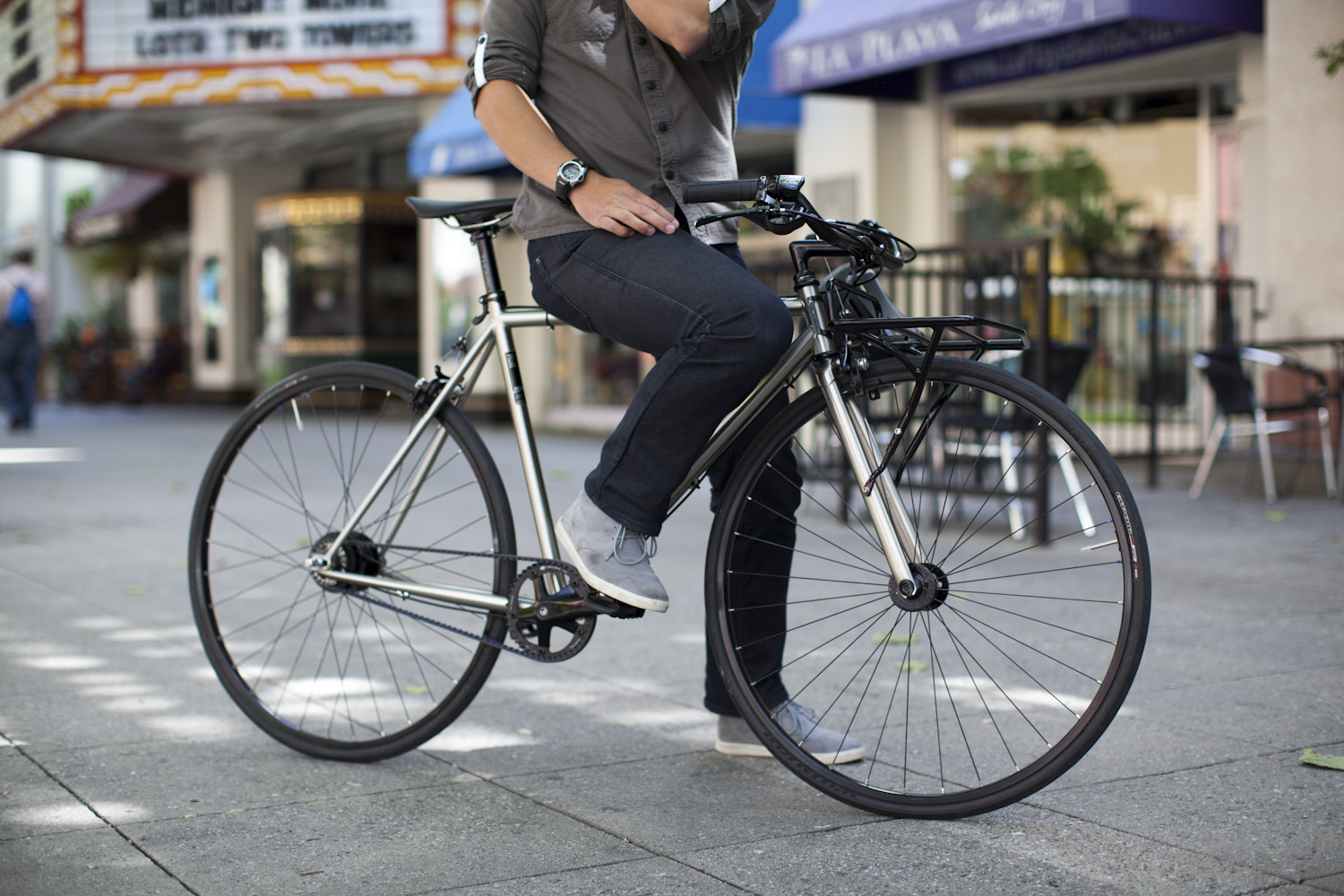 Gates Carbon Drive is preparing for a bender in Vegas next week. Visit our Interbike trade show booth (# 15125) to preview a premium selection of 2013 belt drive bikes from Felt, Scott, Globe, Specialized, Raleigh, Redline, REEB, Spot, Budnitz, Co-Motion and more. Or come ride the belt at Outdoor Demo (D1031) aboard one of 2013s most tenacious new singlespeeds, the “Honey Badger” from Spot Brand. Here is a sneak peak at some of the suh-weetest commuter bikes and city bikes, mountain and cyclocross bikes–even a cargo bike and tandem–that will be in shops next year. Because belts aren’t just for holding up your pants anymore. 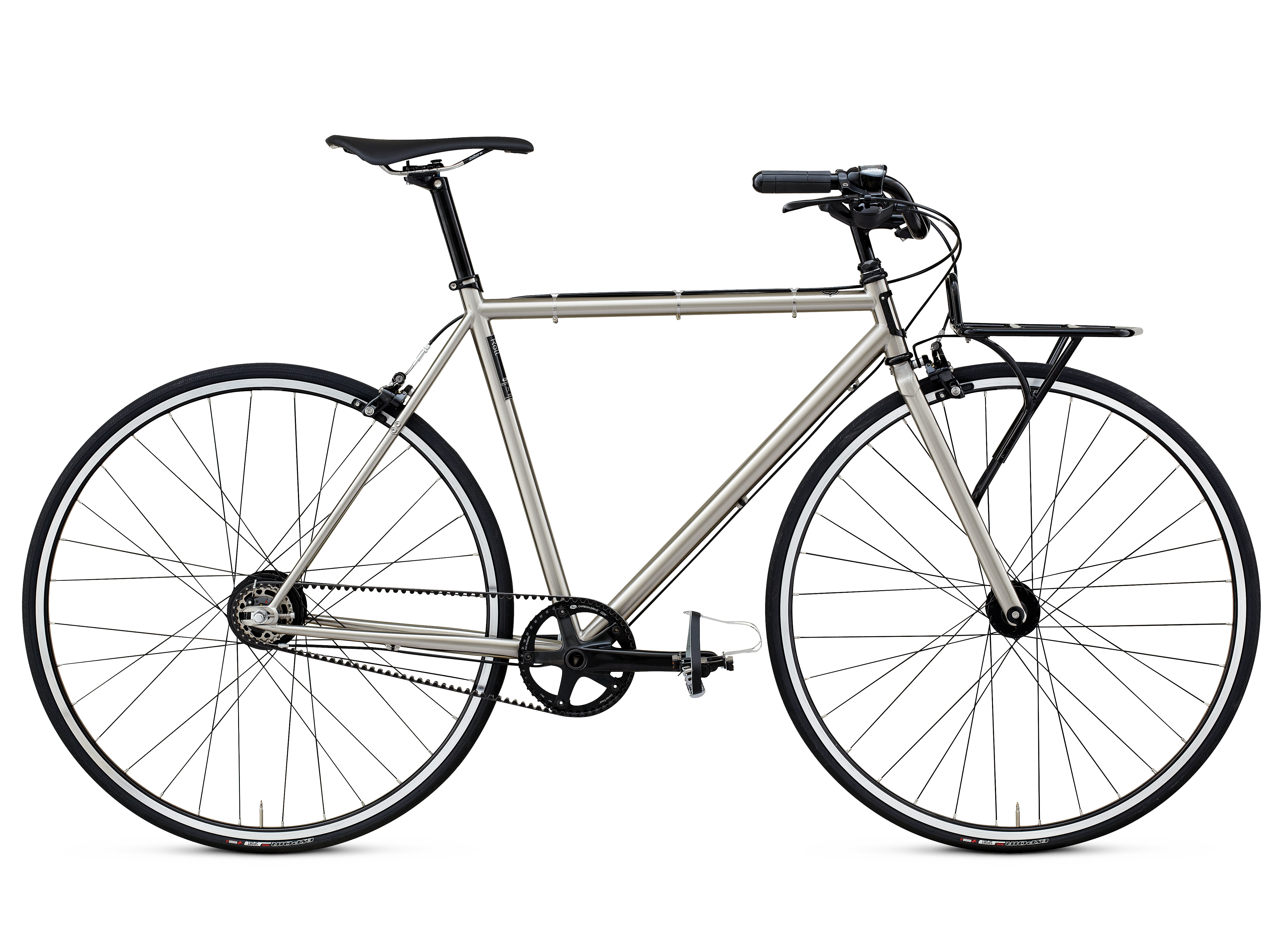 Pictured above and atop this post is the Roll 8 Rare from Globe. It features an eight-speed Shimano internally geared hub (IGH), a porteur rack for carrying a laptop bag or rack of beer. Fast and light with a stripped-down street aesthetic, it has Soho or San Francisco written all over it. 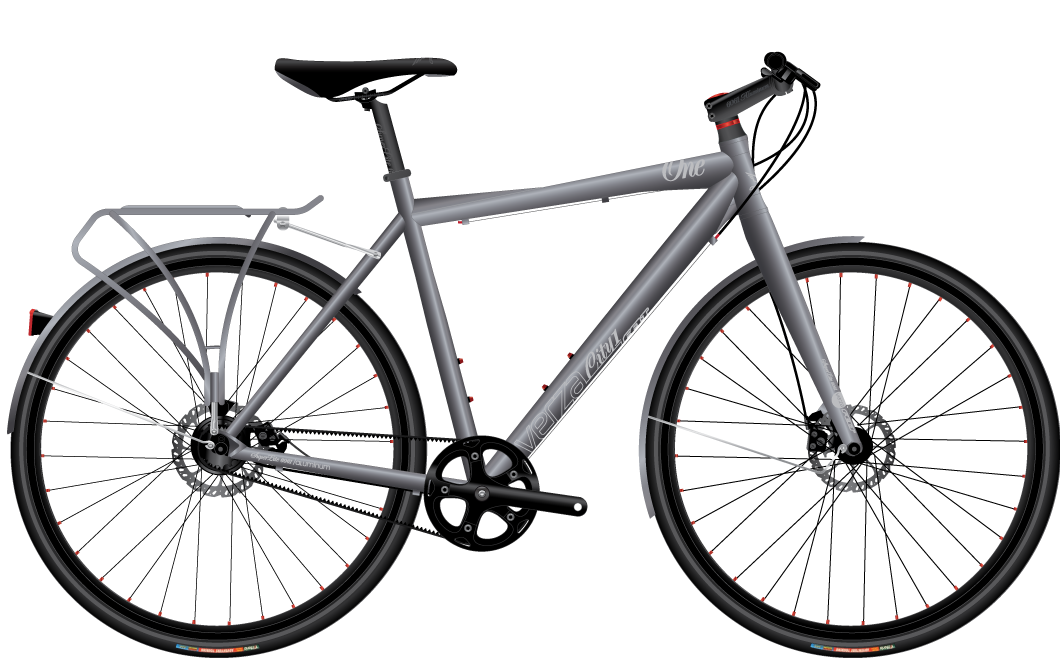 The Verza City One is the new urban bike from Felt. With full fenders, Gates Carbon Drive, disc brakes, a rack and eight-speed IGH, it is a performance commuter for roadies and riders who want an urban bike that flies. 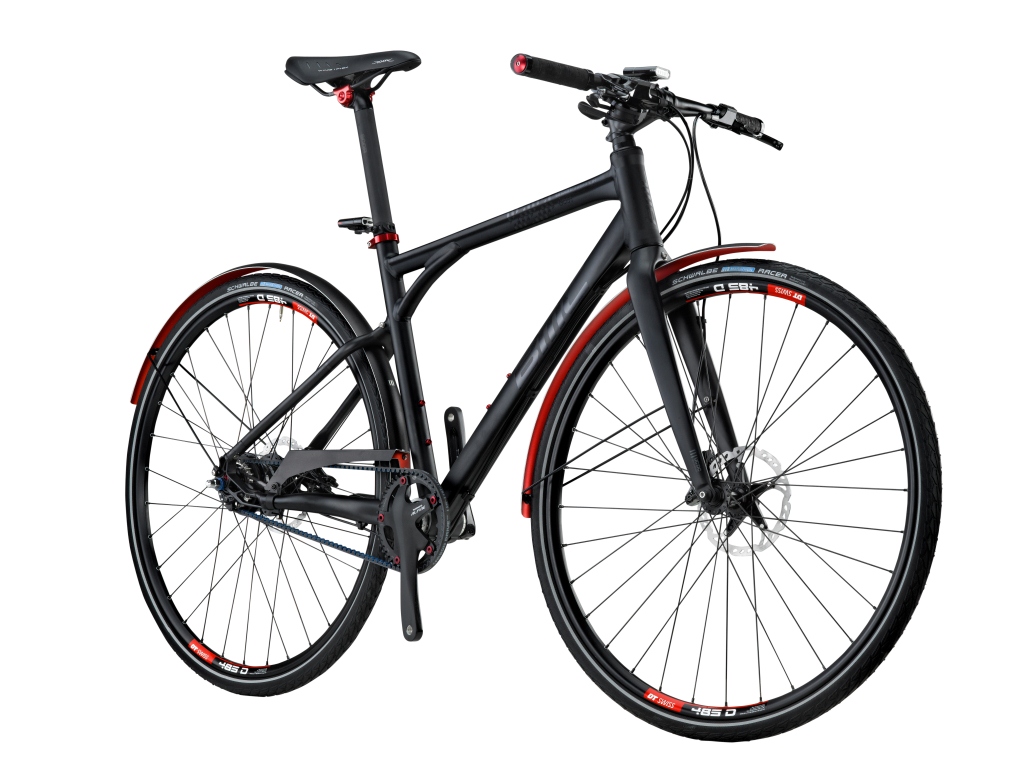 Last year, BMC introduced the Urbanchallenge UC01 to North America with a silver frame and an eight-speed internally geared hub. For 2013, the Swiss company ups the performance with an 11-speed IGH for more gearing, as well as a color makeover. Impressed by its stealthy style and quiet drivetrain, Wired called it “the best bike for a Ninja to ride.” 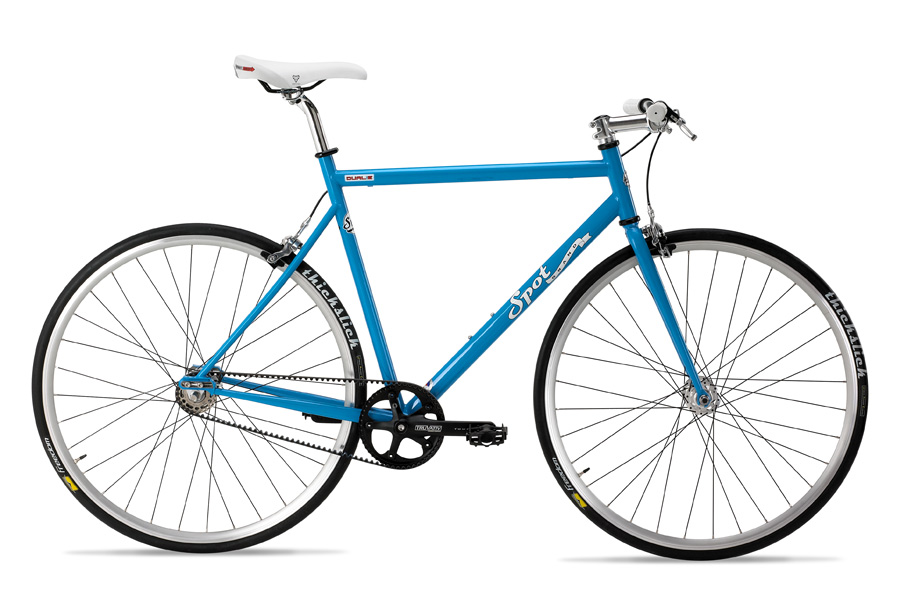 For all those singlespeeders out there, the Dualie from Spot Brand shows that two is the new one. The Dualie does away with shifter cables with a two-speed kickback hub that shifts with a quarter revolution backwards on the pedals. Bicycling Magazine features the Dualie in a Best New City Bikes feature in its October issue. Check it out in the Interbike Fashion Show presented by Momentum Magazine on Wednesday at 10 am and 2 pm on the Street Level of the Sands Expo. 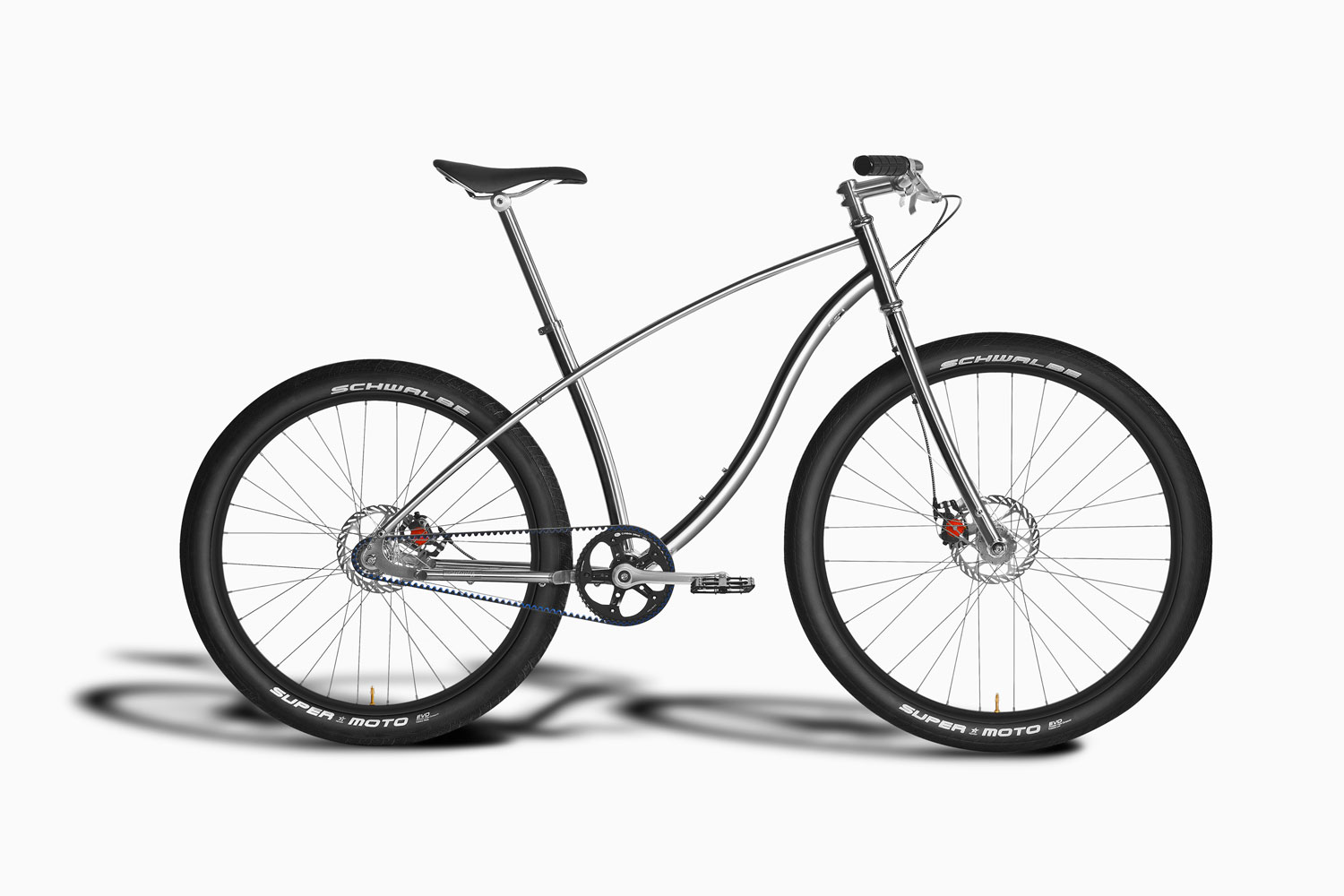 The bike above always draws a crowd. It’s the No. 2 from Budnitz Bicycles, a Boulder brand that specs Carbon Drive on all its models. Budnitz is the company of Kid Robot founder Paul Budnitz, a designer known for his fine eye for detail. When Gates displayed the bike recently in Aspen, someone walked up and said “I’m going to buy one of those.” At $5,600, this fat-tire city cruiser is the ideal Aspen ride. 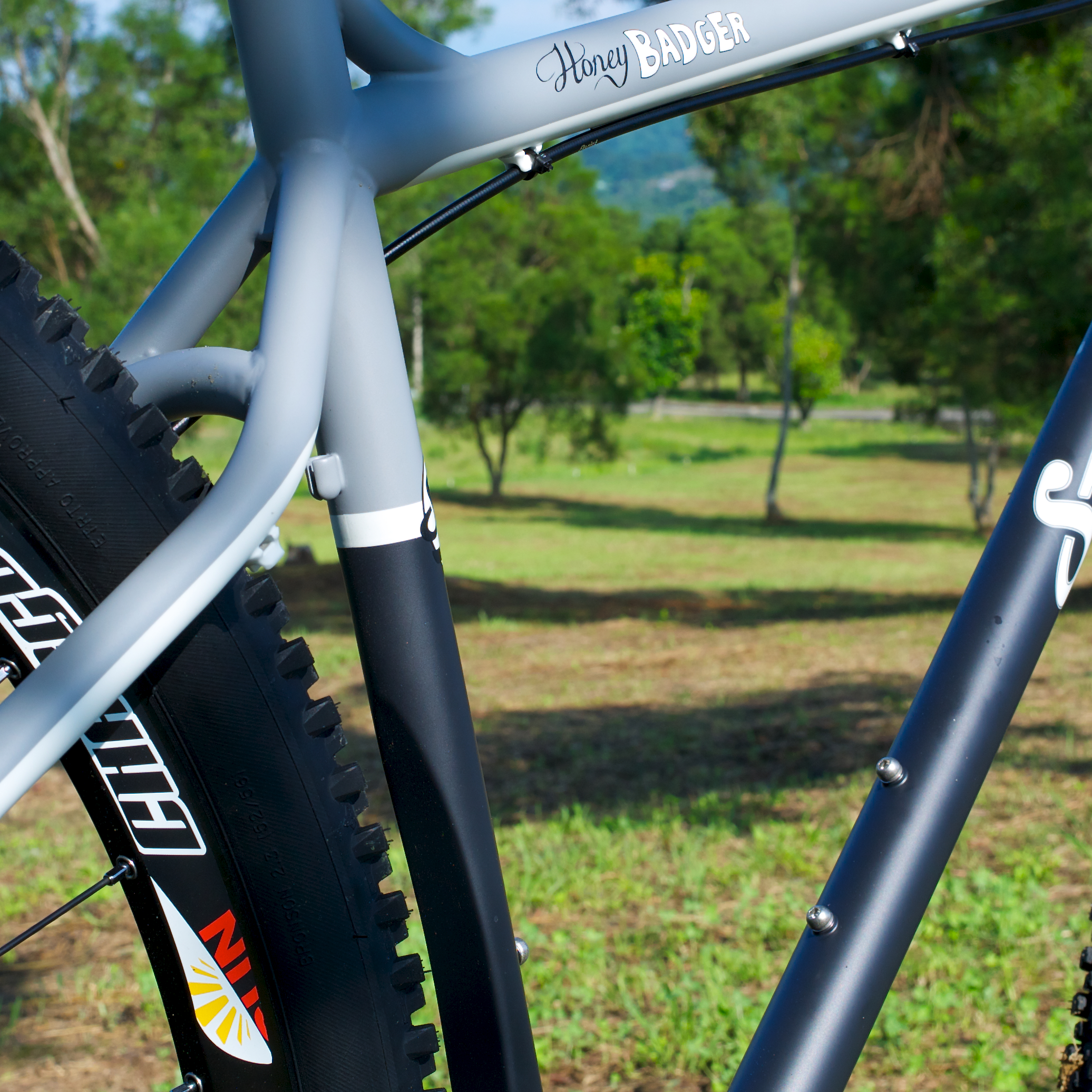 Feel like getting dirty? Leave the greasy lube at home and jump aboard one of these sexy singlespeed 29ers to feel the smooth power of Carbon Drive. Above is a spy shot of the new Honey Badger from Spot, which will have a fleet of demo bikes at Outdoor Demo. Below is a naked spy shot of the new titanium Cream frame from Spot. Don’t worry, it will be fully dressed up for the show. 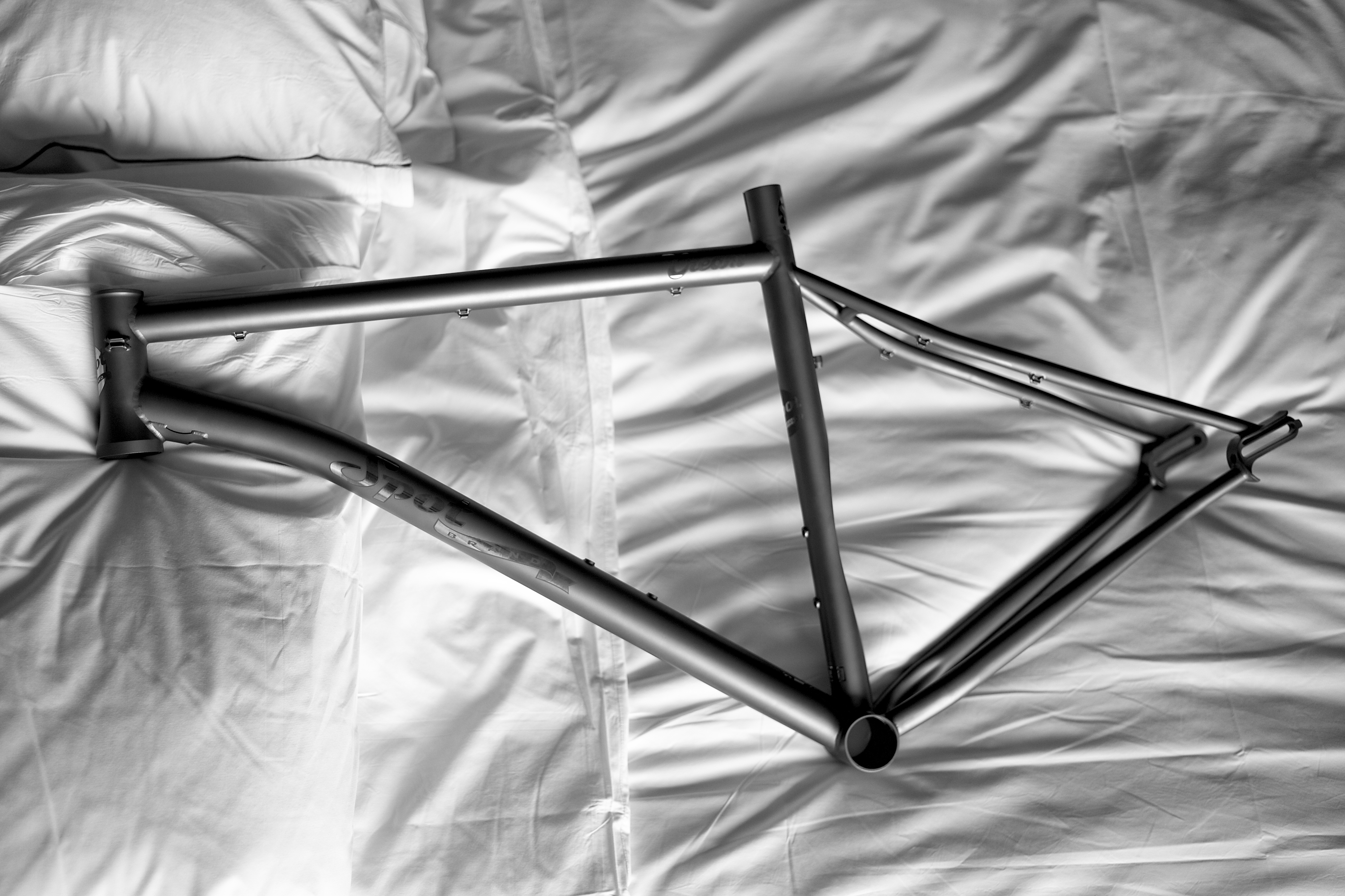 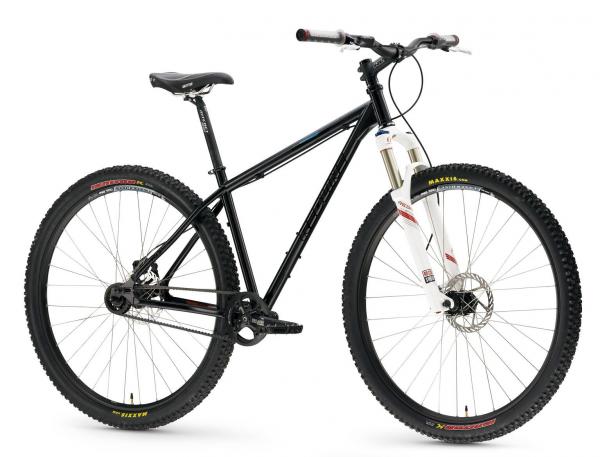 Redline’s Monobelt 29er, above, is another singlespeed that Gates is eager to show off. It is the belt compatible version of Redline’s trusty Mono 29. We’ve ridden it, and it’s super fun.

Below is the XXIX from our friends at Raleigh. It has been upgraded with a Fox fork for 2013 (it previously had a rigid fork). The Fox fork will make this bike even more popular next year. 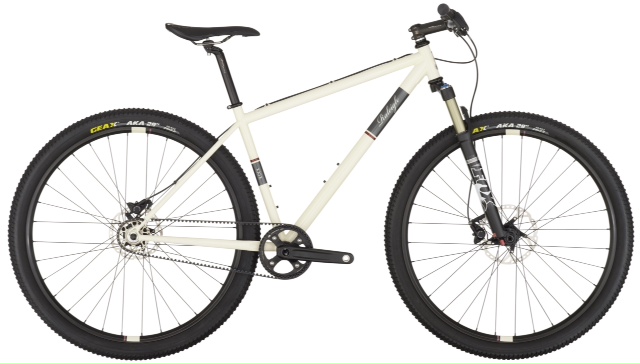 Up next is the REEB, made by the beer lovers and singlespeedsters at the best microbrewery in America–Oskar Blues in Lyons and Longmont, Colorado, with a new location opening in Brevard, North Carolina, near the legendary East Coast singletrack of Pisgah National Forest. Gates will also show off the latest build from REEB–a fat bike called the REEBadonkadonk (pictured below in its natural habitat, the Arctic). 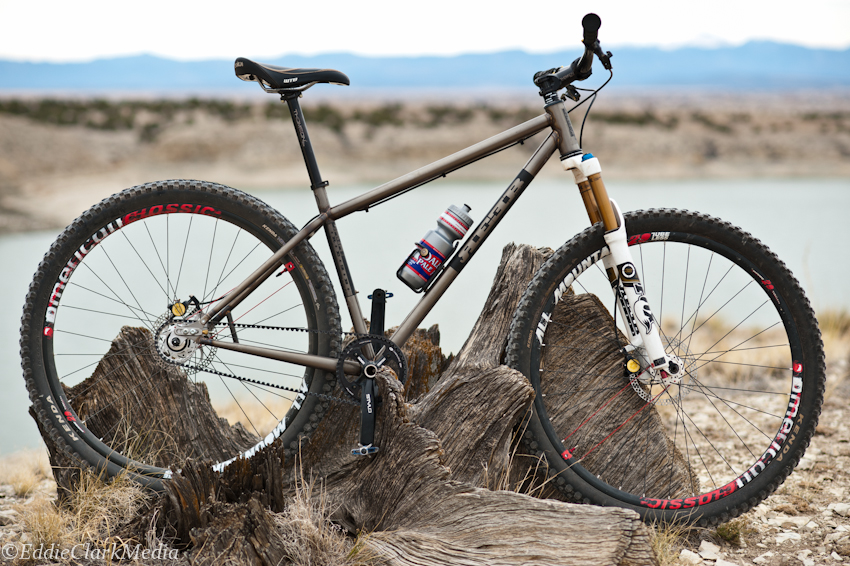 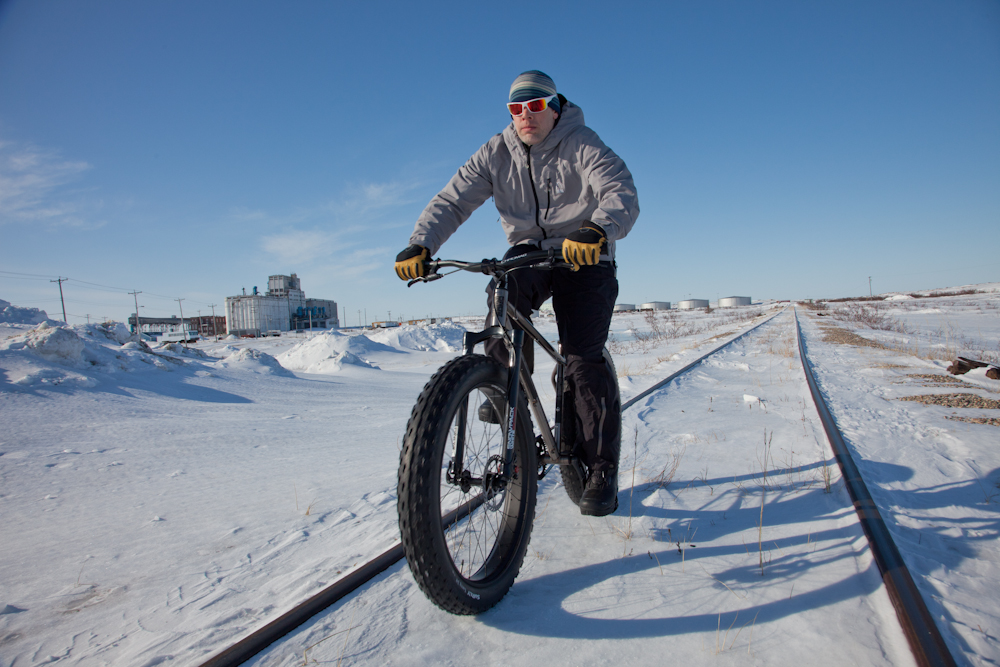 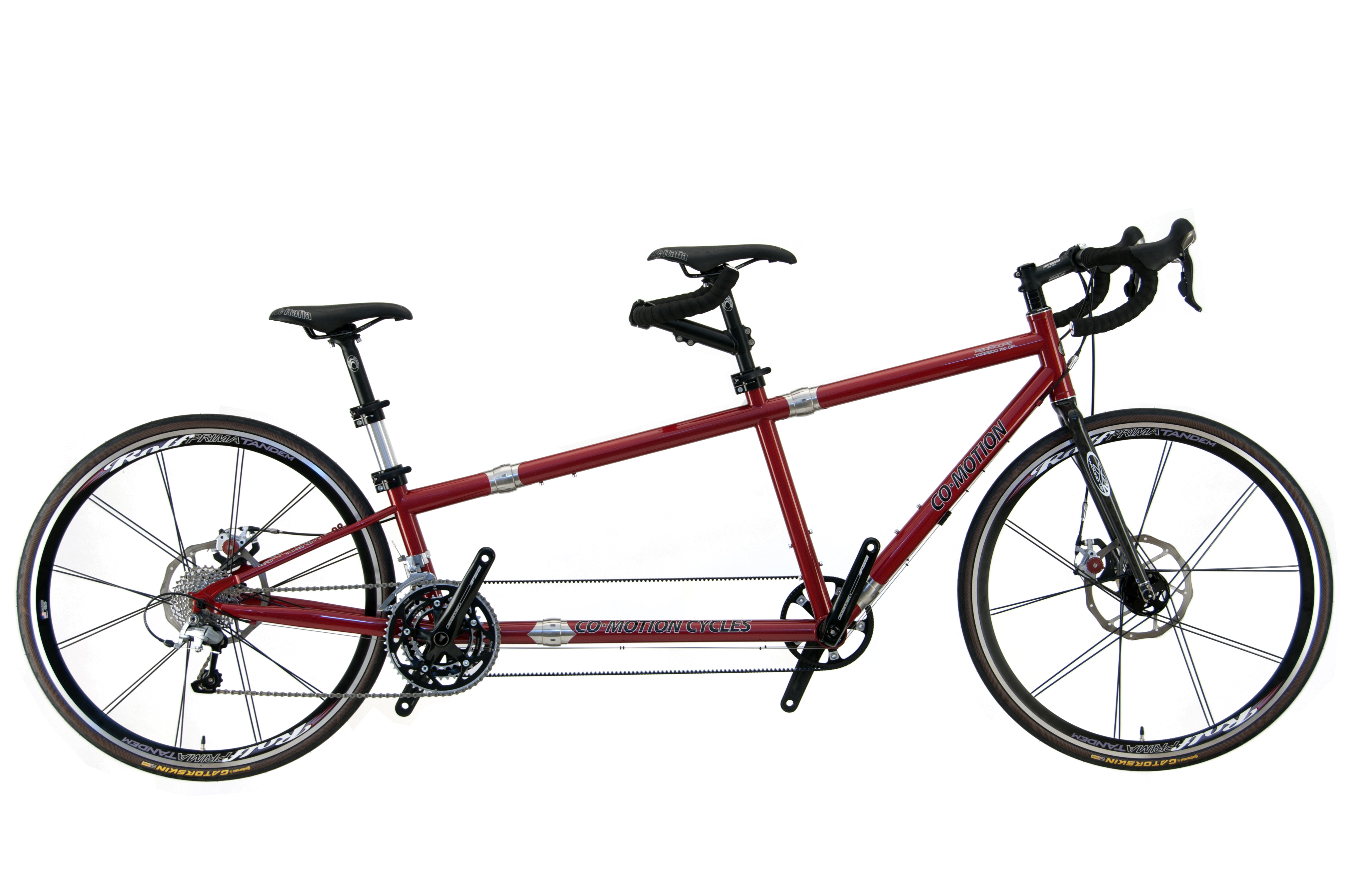 Carbon Drive has become a big hit in tandem cycling because of the weight the belt shaves off compared to running a long long chain. Pictured above is the Periscope Torpedo from tandem experts Co-Motion. It features the new CenterTrack tandem timing belt–another example of how Gates continues to expand its belt size offerings to meet all cycling niches. Co-Motion will have multiple belt drive bikes in its booth: the Americano Rohloff, Divide Rohloff, Equator (new tandem model with Rohloff hub and dual belt drives), Robusta, Supremo and Macchiato. 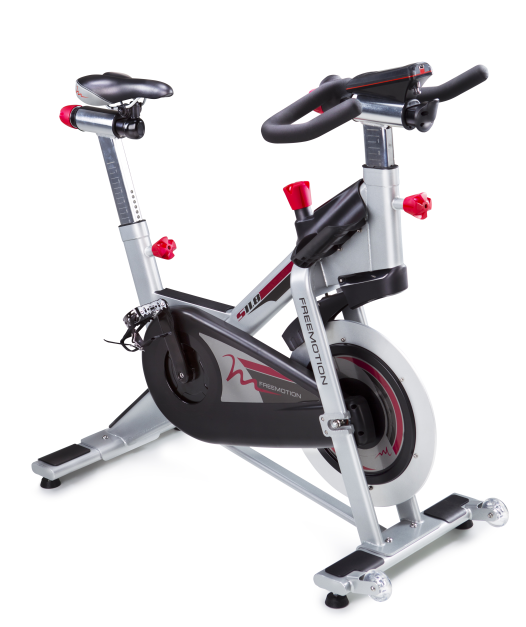 Want to ride the belt all winter long? Meet the newest member of the Gates Carbon Drive family: FreeMotion Fitness. The company is the first brand to spec the Carbon Drive in its stationary bikes and trainers for health clubs and home use. FreeMotion tells us they are selling like hot cakes to health clubs because the belt requires less maintenance than chain driven stationary bikes. Come take a spin in the Gates booth.

Team Gates Carbon Drive’s singlespeed cyclocross team will have some new competition this year at CrossVegas. SoCal bike maker Ritte has created a new belt drive CX rig, which will debut at CrossVegas. Instead of the usual sliding dropouts it features the Niner EBB and shell for easy belt tensioning. Above is the frameset, but we will have a complete bike in the Gates booth. Team Ritte joins the growing cadre of SS CXers riding Carbon Drive. Cue the cowbells. 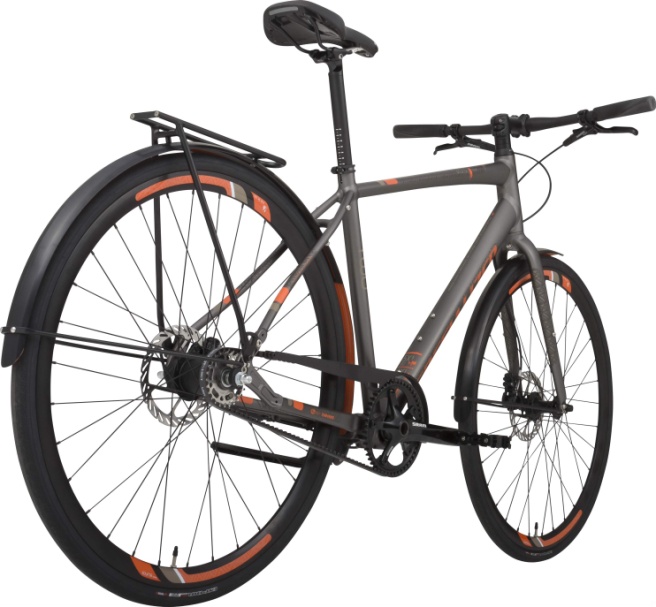 The Specialized Source 2 (above) is a bike that pairs the belt with SRAM’s new w-speed autoshifter, the Automatix. For every Source 2 purchased, SRAM, Specialized and Gates will donate a World Bicycle Relief bike to rural health workers in Africa. Great bike, good cause. 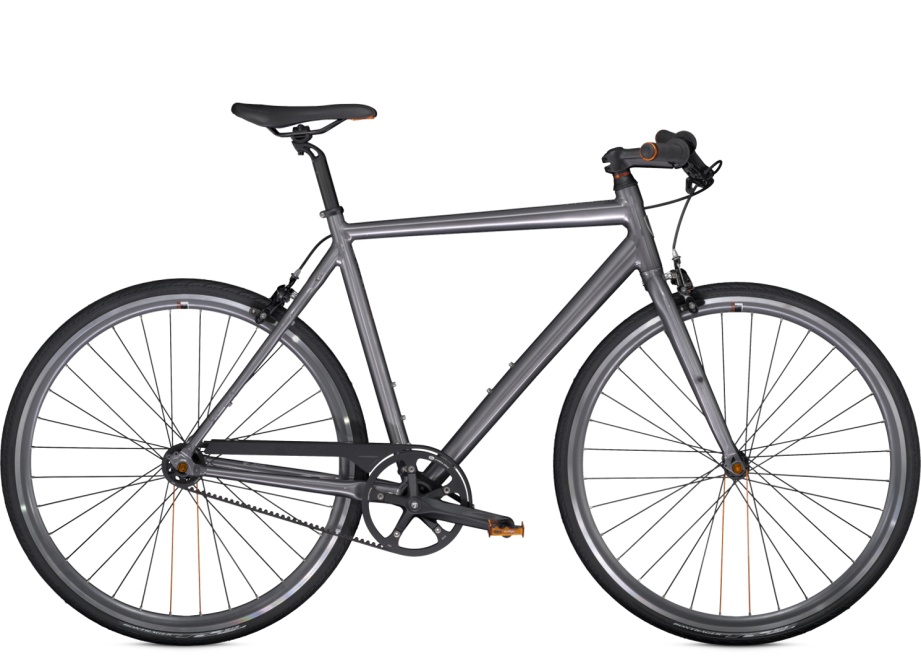 When Gates Carbon Drive debuted in 2008, Trek was one of the first brands to spec it. Pictured above is the Trek District, which has been in the Trek lineup since 2008 and remains one of the most popular belt drive bikes out there. One day it will be in the belt drive hall of fame. The District is a fast and light singlespeed for racing urban traffic or ripping the bike paths. Gates will soon be releasing details of a “Pimp Your District” promotion, and Gates employee Mark Chapman will show off his pimped-out District at Interbike. 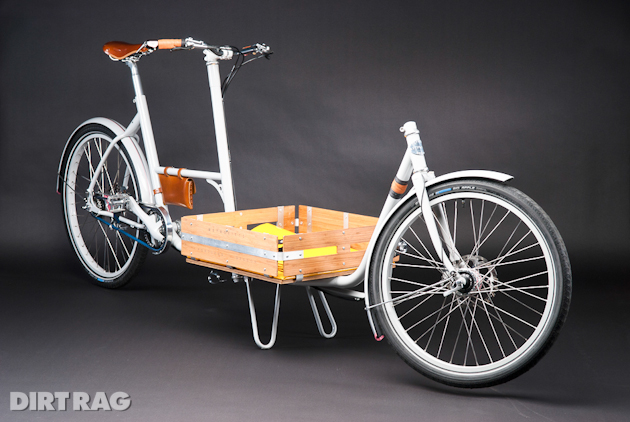 Cargo bikes are the pickup trucks of cycling. Metrofiets is sending us one of their belt drive cargo carriers for display. That baby is made for carrying kegs.

OK, enough already. There will be many more bikes with Gates Carbon Drive at the show in exhibitor booths. Come visit us in Vegas. Get belted. 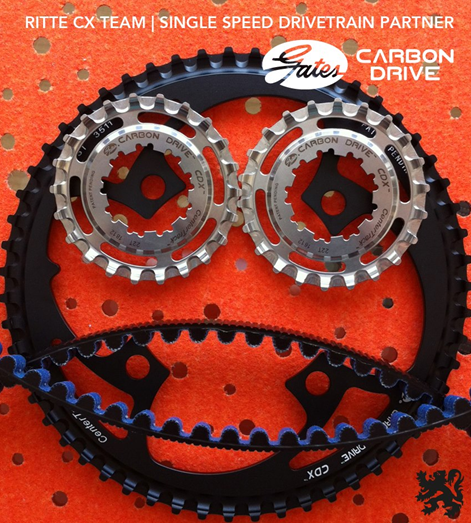