Coffee to Go: Velopresso is the Ultimate Pedal-Powered (and Belted) Mobile Espresso Station Coffee-loving bicyclists, meet the Velopresso: an ingenious pedal-powered mobile coffee stand designed to lower the carbon footprint of our collective caffeine habit. Created by two product design students from the Royal College of Art in London, the machine uses no electricity, making it perfect for street corners and off-the-grid locations. Velopresso not only gets around town by pedal power; the coffee grinder is also pedal-powered. Delicious coffee, no electricity, no motors, no noise. “Velopresso was conceived against the backdrop of a global renaissance in cycling culture that is being driven by the desire for more sustainable cities and lifestyles,” says co-creator Amos Field Reid, pictured below kneeling behind the machine. “The urban coffee scene is also expanding and diversifying, including a convergence with cycling culture. Velopresso engages directly with these cutting-edge urban cultures.”

The only fuel use consists of a camp stove to heat the water and create steam. The stove now uses camping/mountaineer’s gas, but Reid and co-creator Lasse Oiva are researching methods to create ethanol alcohol from the spent coffee grounds, which would be used to fire the camp stove burner. “Research is underway to derive a zero-carbon fuel for the stove from waste grinds,” Reid says. 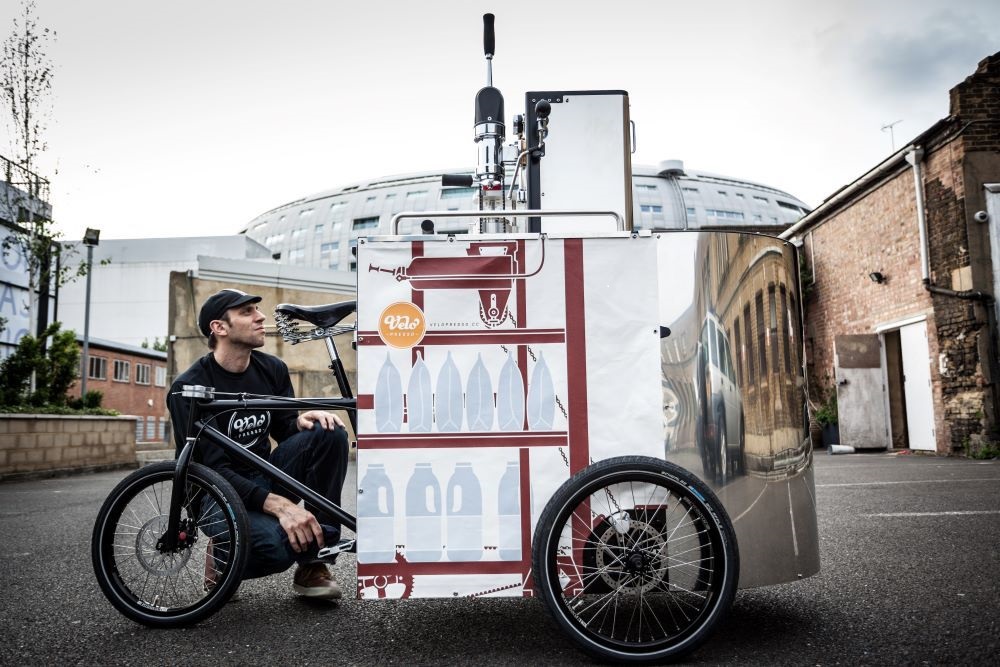 We love the Velopresso because it uses not one but two Gates Carbon Drives–one for locomotion and another to power the grinder, which produces a double-shot of espresso with five seconds of easy pedaling. With a click of a gear lever, the belt-drive transmission switches from powering the trike’s wheels to powering the custom-made grinder. The inventors say the clean and grease-free belt drive was the perfect solution: you don’t want toxic chain lube in your soy latte.

“The Gates Carbon Drive forms an integral part of the Velopresso,” Reid says. “The belt eliminated the problem of an oily chain getting mixed up with the coffee prep environment. It also rendered a chain guard unnecessary, allowing us to showcase this rational, progressive, pedal-powered technology and keeping it all naked as we intended. We wanted technology that looks good and performs perfectly. From the very earliest design sketches we located the Gates Carbon Drive that powers the grinder at the center of the machine–a statement of intent.” Velopresso has already won several design awards including the Deutsche Bank Award for Creative Enterprises 2012, and second place in the Pininfarina Design Contest 2012. Reid and Oiva are now trying to commercialize Velopresso to sell them in Europe and North America. “The Velopresso project as a business is conceived around the production of multiple machines for sale or leasing to individual private vendors alongside coffee and bicycle related companies, as both an eye-catching new form of mobile retail operation and a highly visible promotional vehicle,” Reid says. The machine’s weatherproof side panels can be customized for company or corporate branding.