Taylor Nye Takes the Lead in the Boulder Cyclocross Series

Colorado cyclocross racing offers huge contrasts in conditions. One day you are racing on slow and soggy grass, the next on bone-dry and fast hardpack. That was the case last weekend as Team Gates Carbon Drive battled on the wet grass of the Interlocken course in Broomfield on Saturday, then lined up for the dusty and bumpy Xilinx course in Longmont on Sunday. Out of the dust and mud emerged Taylor Nye, who took the lead in both the Boulder Racing Cyclocross Series and the Colorado Cross Cup Racer competition!

Saturday’s Interlocken course is always popular because it is one of the few in Colorado with lots of grass, plus a good balance of sand, pavement and twisty turns. The popularity means the fields are big and the competition deep. Mitch Westall loves this course and was off like a shot right from the gun. The first two laps saw Gates grouping at the front as Taylor Nye, Ryan McFarling, Garrett Davis and Carlos Casali joined Mitch. Taylor Jung and I were a bit further back, mired in the deep and wet grass. Anyone unfortunate enough to make the front group was worked over by constant attacks from the Gates crew. Finally, Taylor and Mitch escaped off the front. 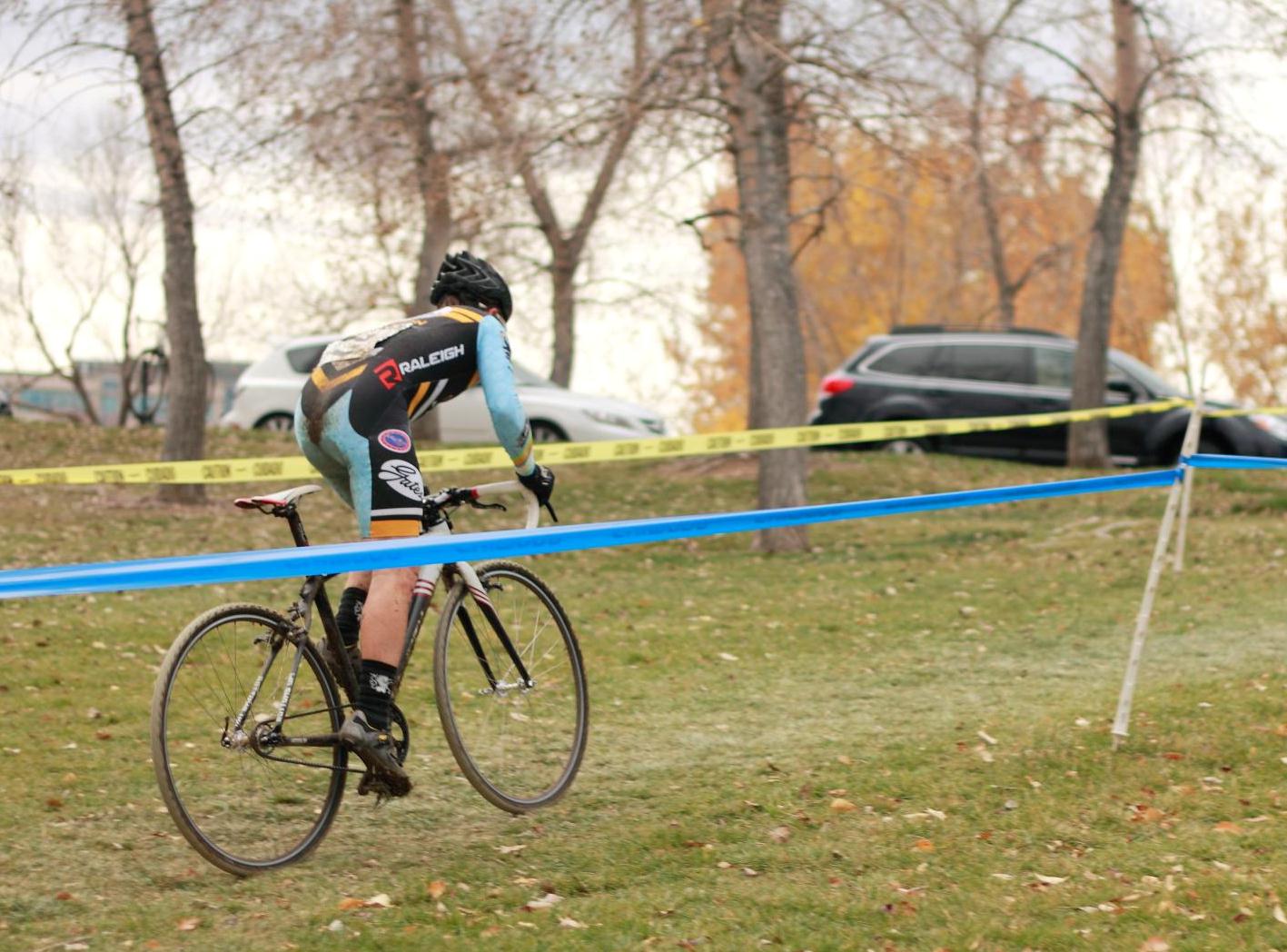 Photo by Six Degrees to Slush

Both riders worked together to increase their lead until they were safe enough to start attacking one another for the win. Neither rider was giving up though, but a slip by Mitch made it look like the race was over. He managed to close back up to Taylor in the final turns, and even took the lead, but in the end it was Taylor taking the win while both riders celebrated. Behind them, Gates continued a strong day by putting five riders in the top ten as Ryan was 4th, Garrett was 6th and Carlos finished up in 10th. Taylor J was 16th, and I got lost in the mud, somewhere further back.

Most of the team was back on Sunday, racing on a completely different course at Xilinx. The wet grass was swapped for dry and dusty trails and a couple different styles of barriers. Fresh off the previous day’s win, it was again Taylor Nye leading the first lap. This created a small group at the front, and Taylor had Jesse Swift in the group as well. But this time the team was on the wrong end of the attacks when they caught the back of the Cat3 race and got tangled in the traffic.

Soon it was Jesse doing most of the work while powerful Colby Pearce worked with him as they chased the lone leader. On the last lap Colby attacked and Jesse had to settle for 3rd place, but that third step of the podium was some great company to be in! Even after his impressive win the day before, Taylor stayed close: finishing in fourth. Carlos was 6th, I finished in 9th and chasing hard was Taylor Jung in 13th.

This weekend should bring more excitement. There is a UCI race at the Boulder Reservoir and another UCI race at Valmont Bike Park. Better still: it is snowing as I write this, which means great cyclocross conditions!