Gearbox Grinding: Up Close with the Belt Drive Pinion MTB from Paragon Machineworks 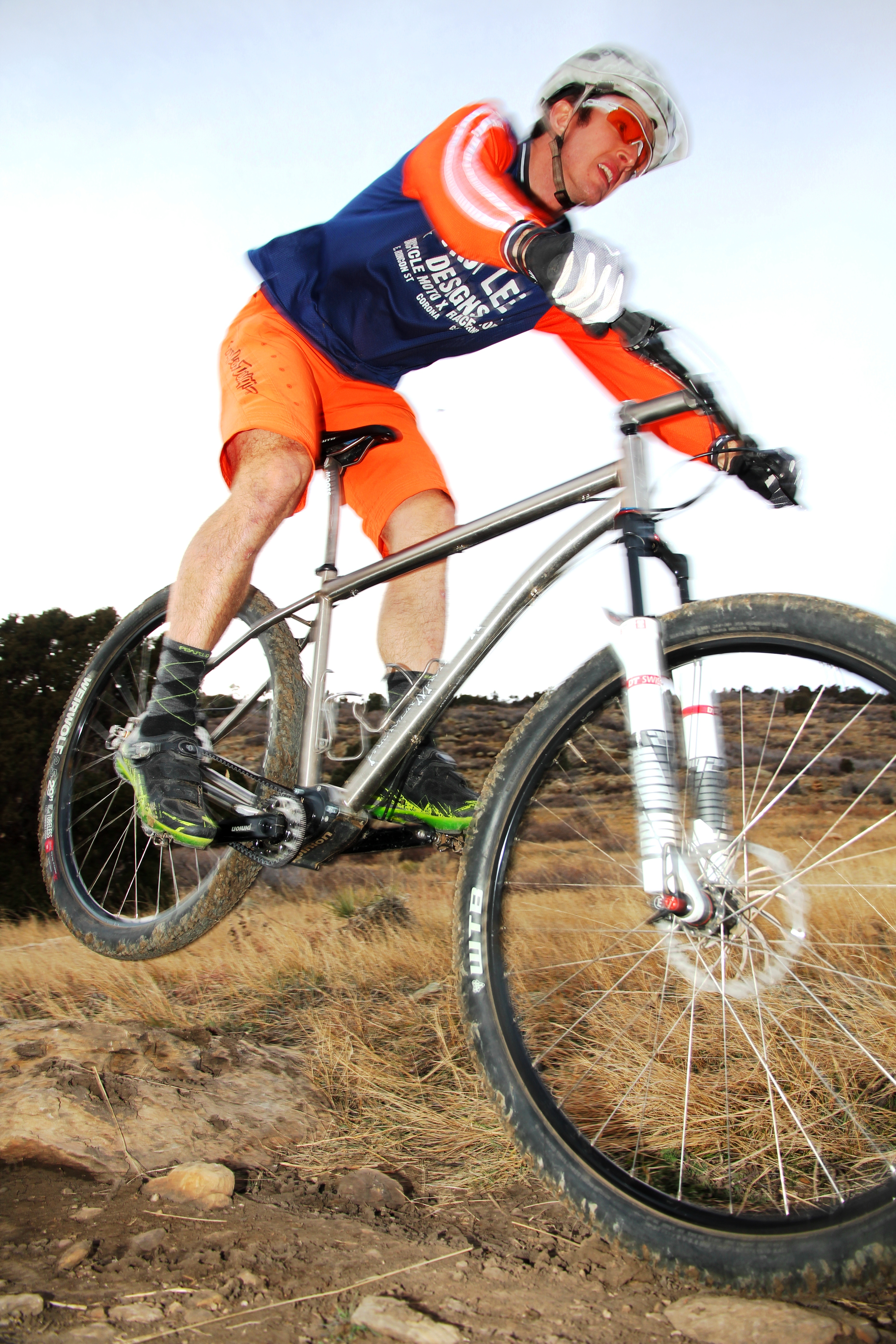 The Pinion gearbox is one of the great up-and-coming bicycle technologies. Gearboxes eliminate the need for derailleurs, and when combined with a Gates Carbon Drive provide a sturdy, clean and low-maintenance drivetrain. A number of European manufacturers are using the Pinion system on trekking bikes, stylish commuter bikes, and burly 29er mountain bikes.Read a Pinion test report from German magazine Trekking Bike.

Paragon Machineworks, which is known for making innovative bicycle components, built the belt drive mountain bike featured in this post for last year’s North American Handmade Bicycle Show.It looks like a single speed with a 1:1 gear ratio of 32-tooth sprockets. But that small box nestled around the bottom bracket holds an 18 speed Pinion gearbox with a range of 636 percent. That’s 200 percent more than your average drivetrain. And you can shift while pedaling or stopped. Gates engineer Michael Cody hammered some trails near Denver on the bike and gave this ride report:

“The Pinion handles shifts under load very easily and its huge range gives you the ability to nail the gear you want when you want it. The bottom of the range allows you to pedal smoothly up the steepest of pitches, and you’ll be hard pressed to be looking for more or less gear on the trail.” 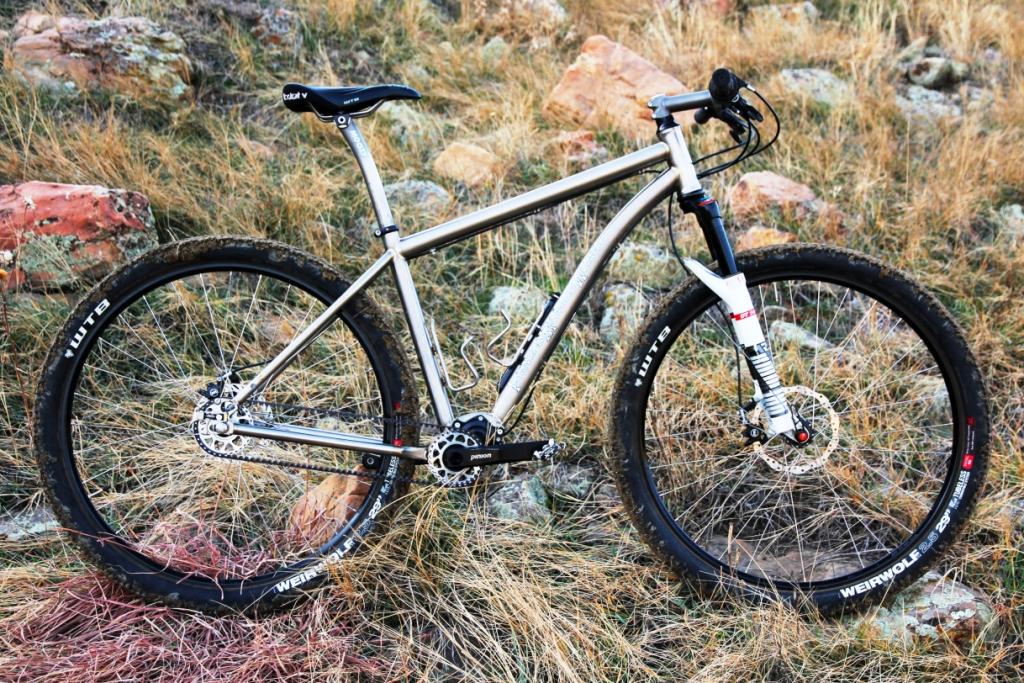 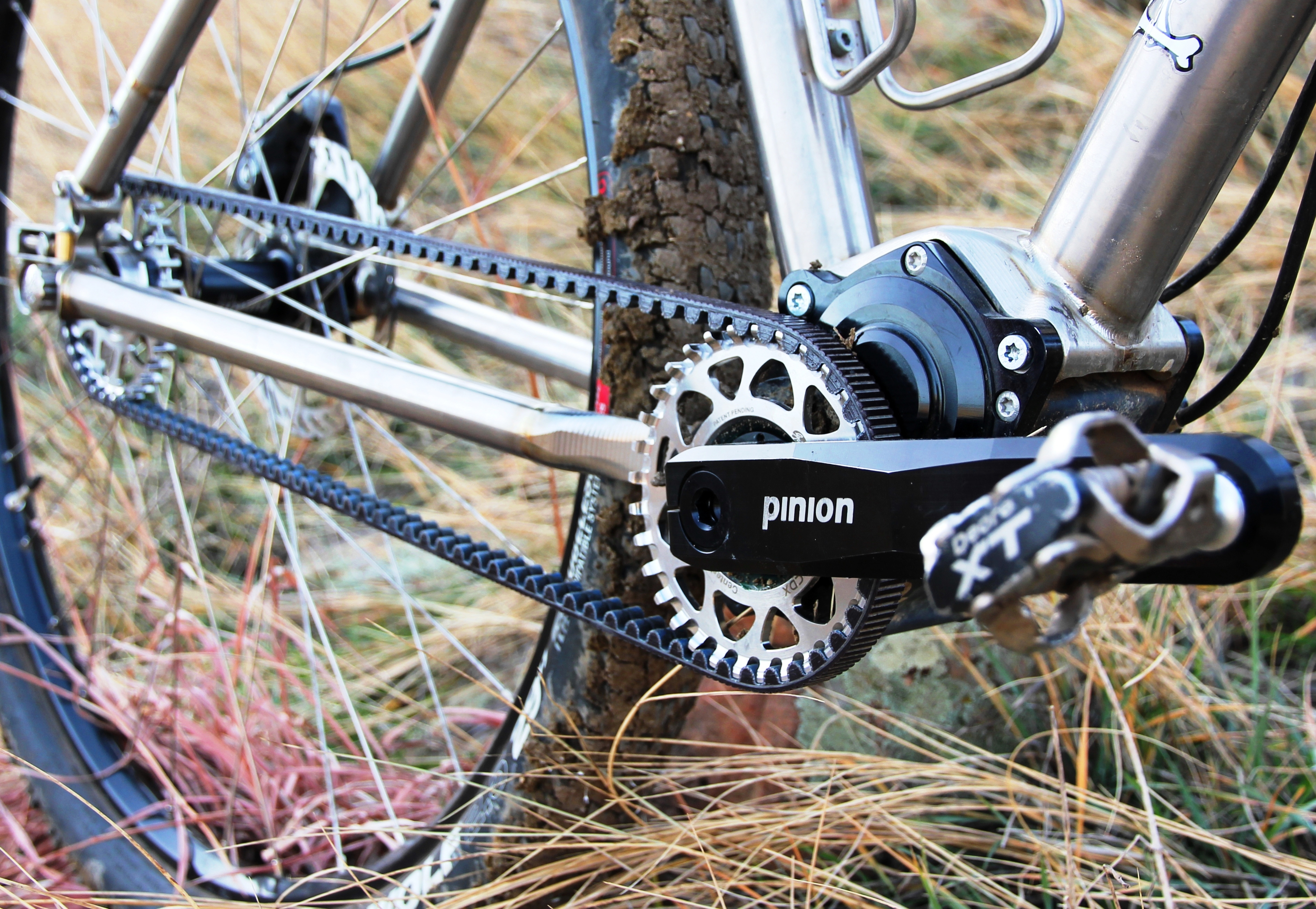 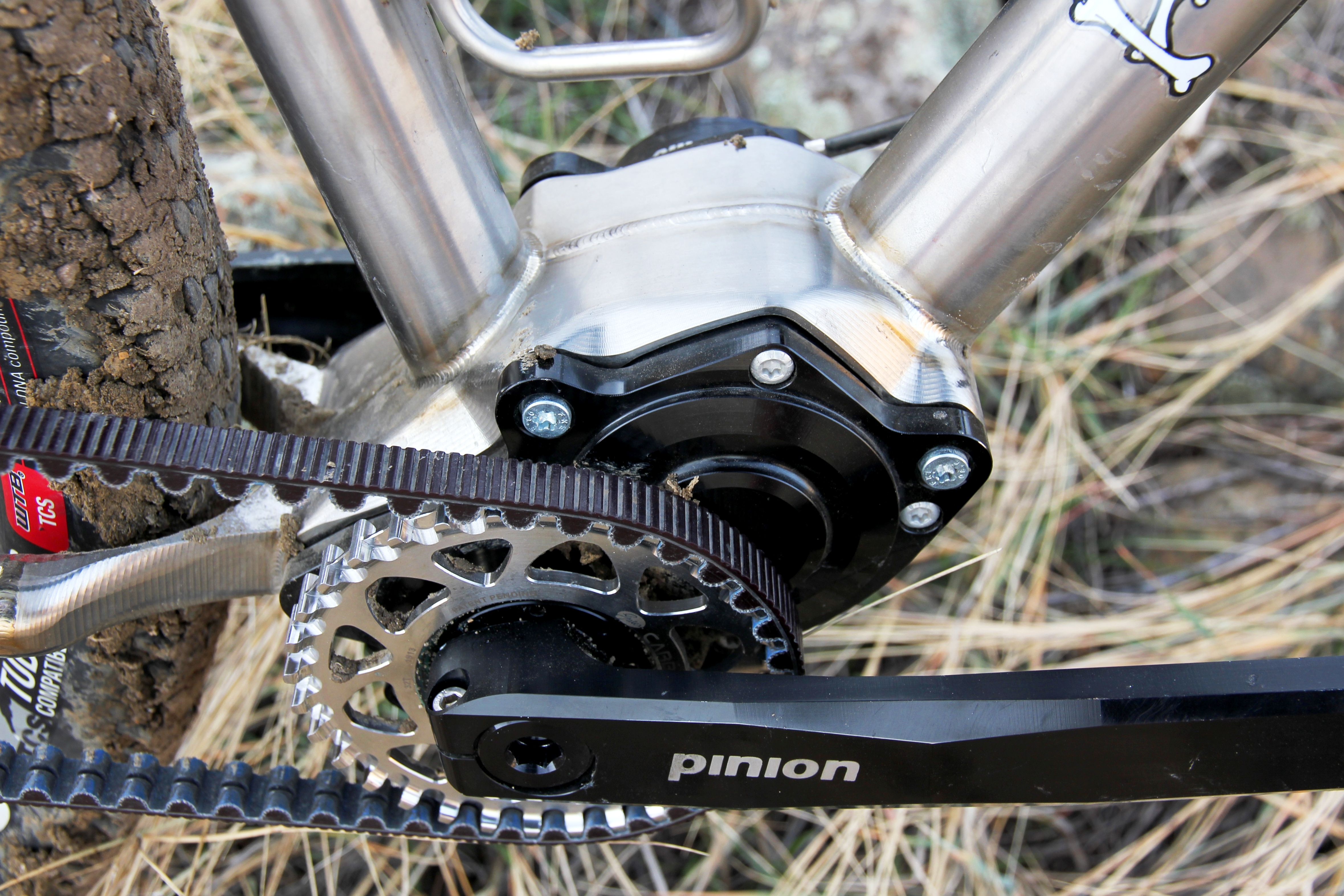 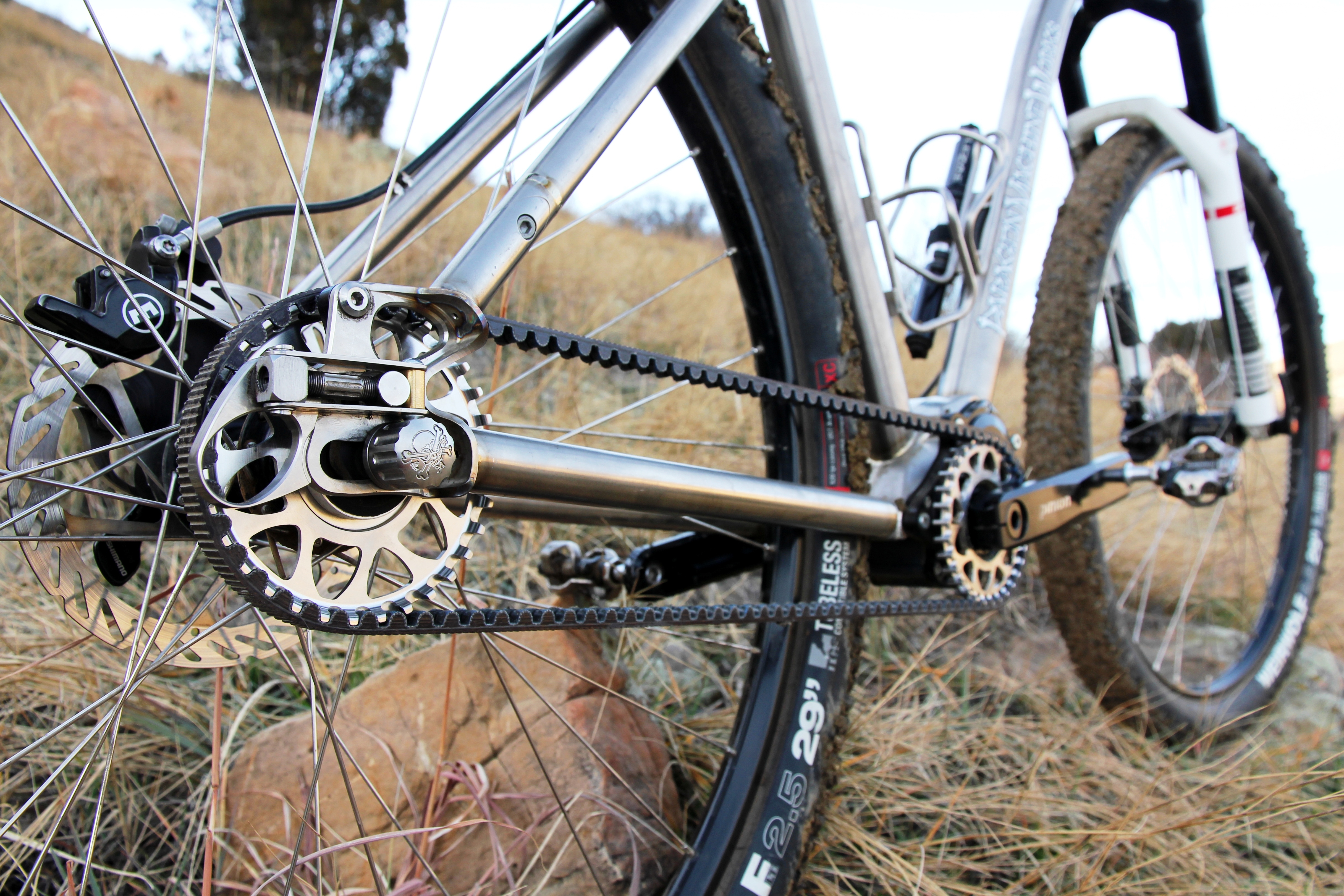 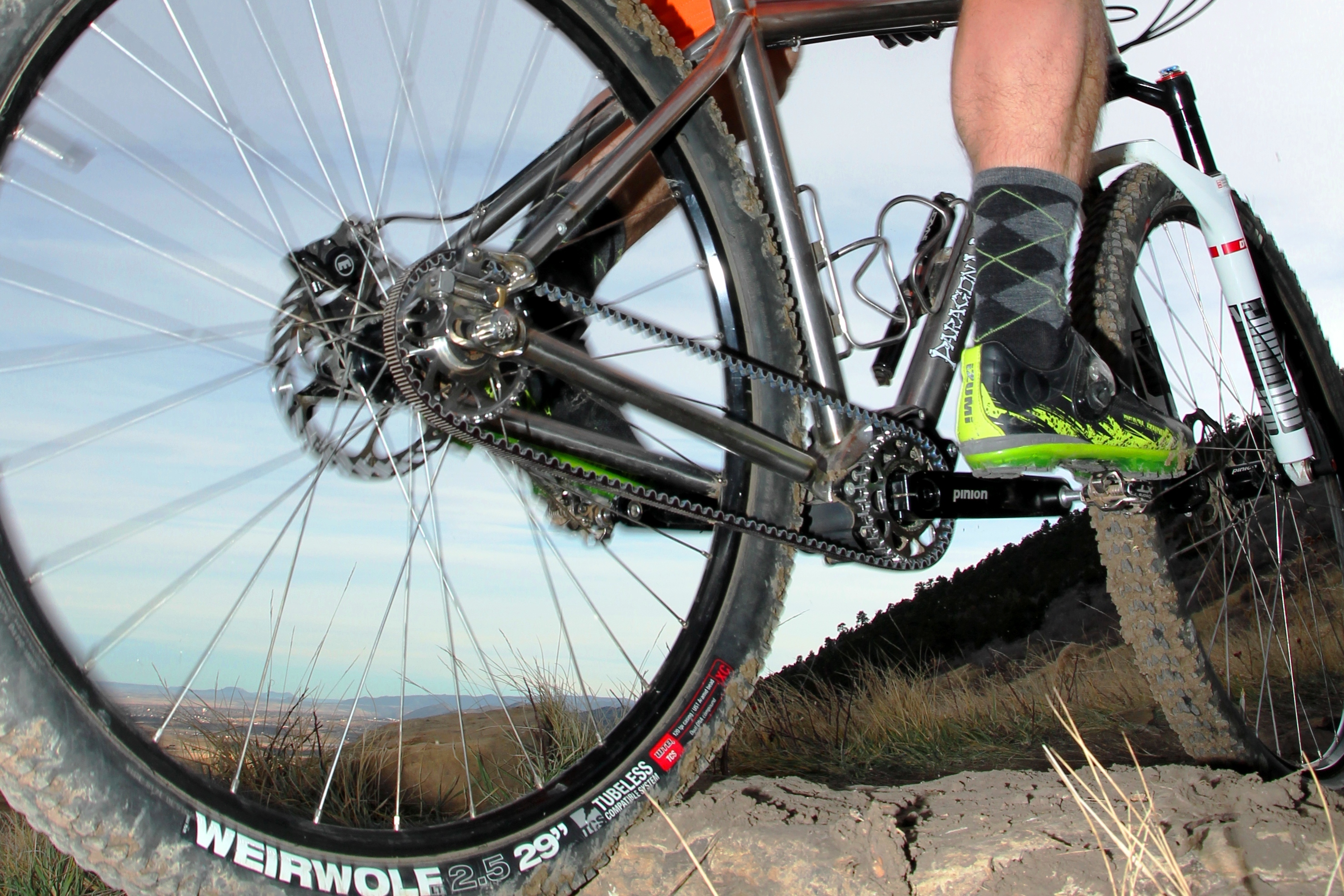 The bike also features an ingenious patent-pending dropout and tensioning system from Paragon.

“Until riding this bike I never gave shiftingfrequency much thought,” says Jeff McWhinney, CAD designer and programmer for Paragon. “In short order I found myself shifting fora couple pedal revolutions (rather than coastingor using a sub-optimal gear). This had the effect of maintaining nearlyperfect horsepower efficiency throughout my ride, but also made me feelmore connected to the trail (and faster) where I found myselffrequently pedaling through gnarly zones.I climbed walls and never spun out on fast descents.”

Look for Paragon at NAHBS 2014 in Charlotte, North Carolina. More information about Pinion can be found here. Gates Carbon Drive makes a sprocket (pictured below and featured on the product page) for use with the Pinion system, and Gates is pleased to be a close partner with this German company that is helping to revolutionize cycling. 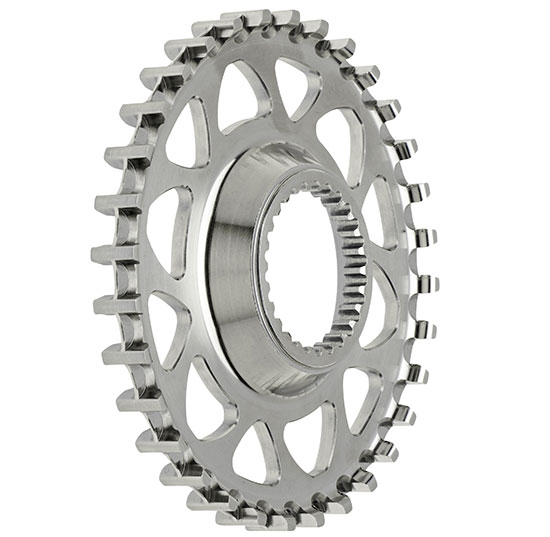