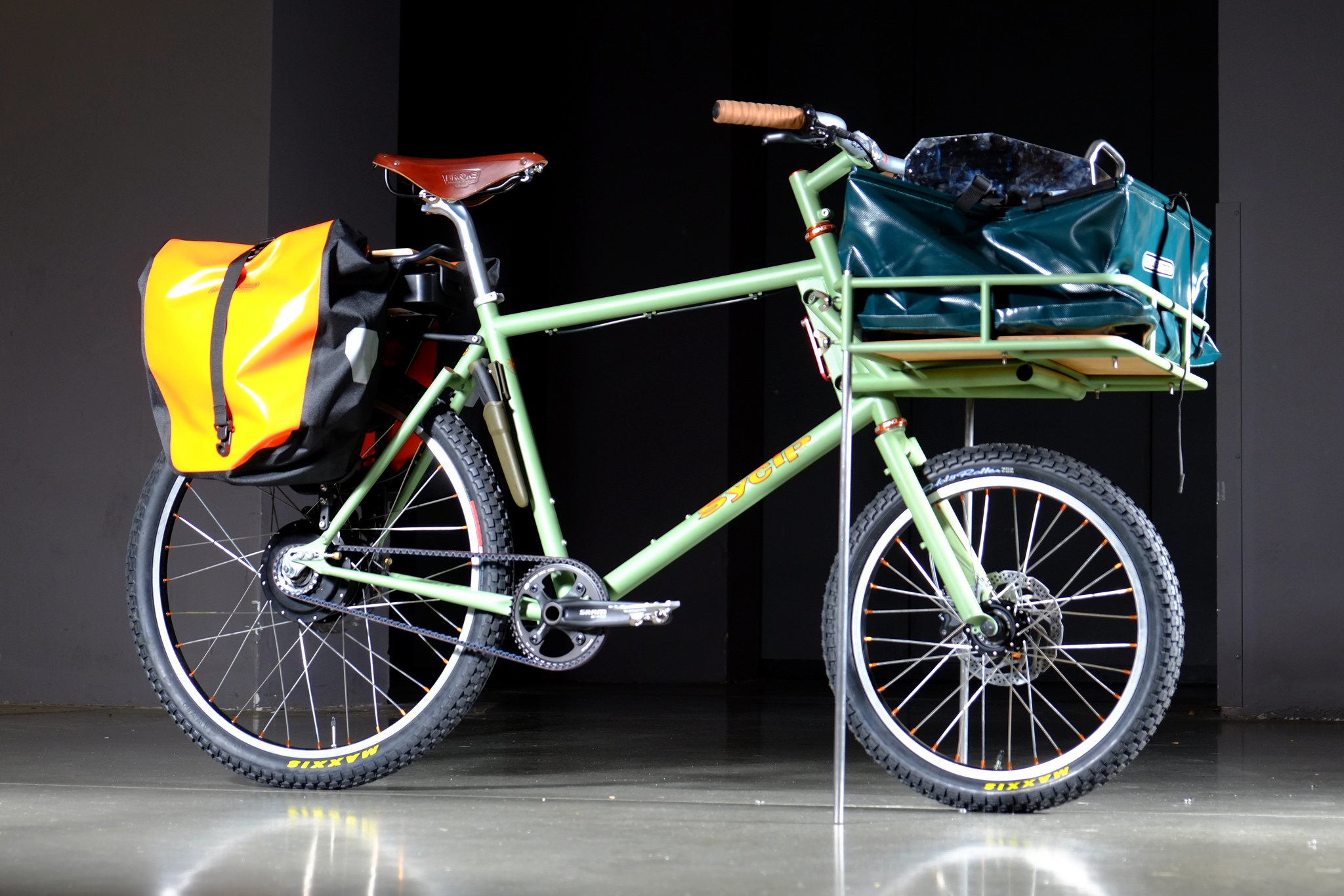 This mobile barbecue machine is among five SRAM E-matic eBikes that Gates Carbon Drive showed at the North American Handmade Bicycle Show last weekend. Jeremy Sycip of Sycip Designs in Portland was inspired by a friend who lugs a portable grill into the woods for barbecuing after long rides. Sycip, who won an award at NAHBS last year for his belt drive gentleman’s town bike, again impressed judges with his creativity–winning the trophy for Best Theme Bike. In addition to a grill rack, the eBike has panniers for beer and ice, a cutting board on the rear rack, a frame-mounted knife and bottle opener. Thanks to the E-matic, getting home with a full belly after a pork chop feast is a breeze. 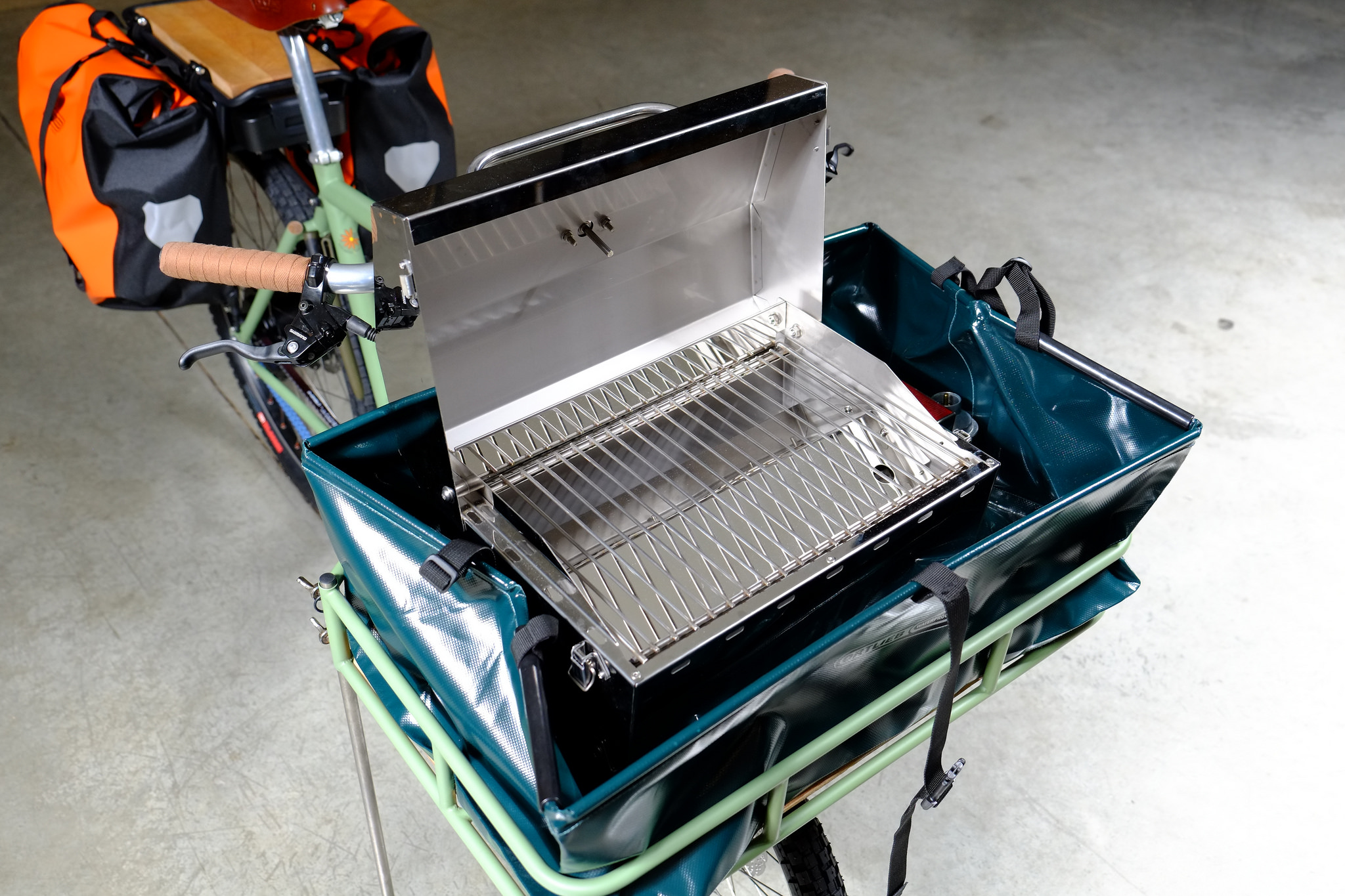 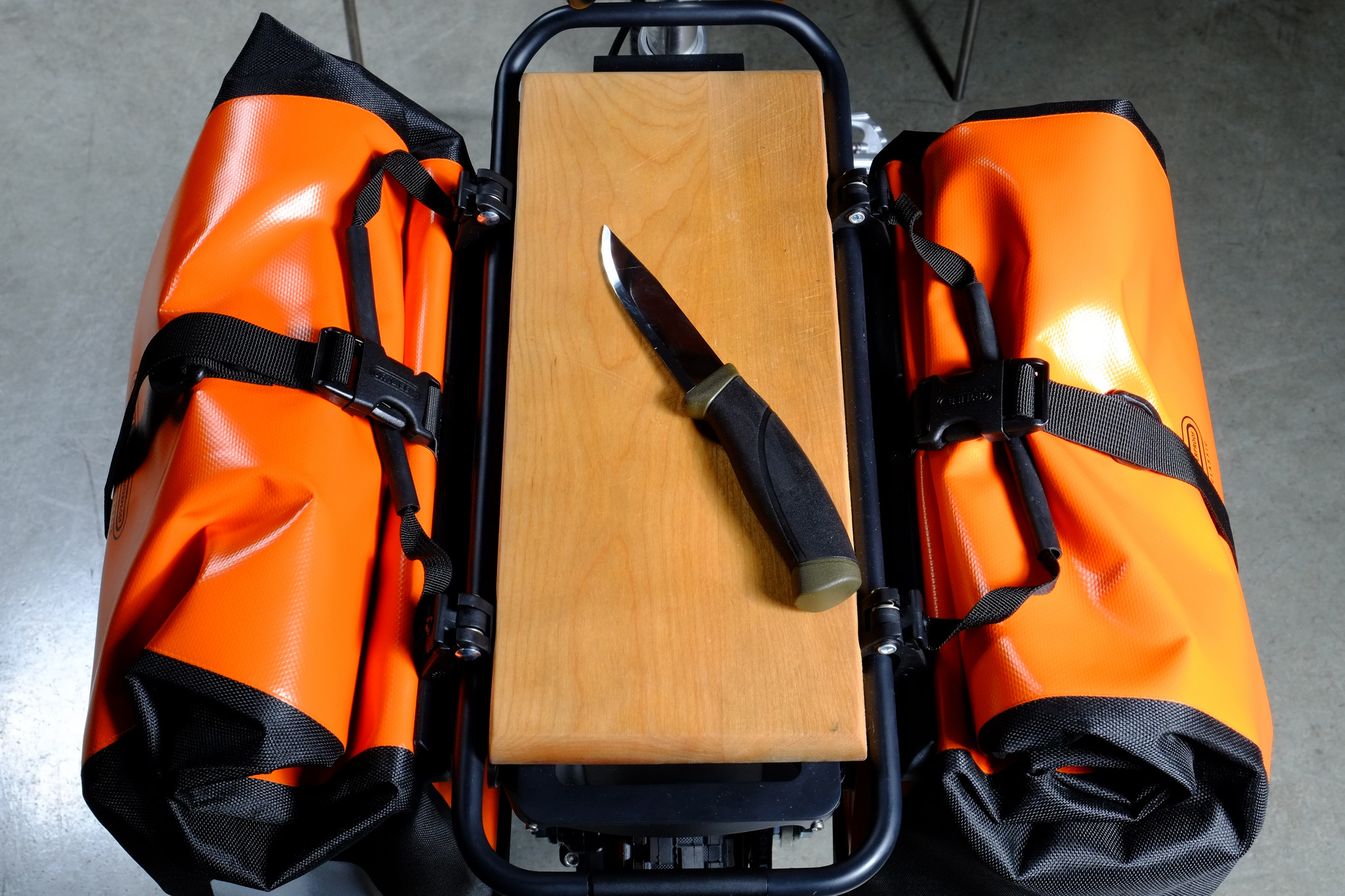 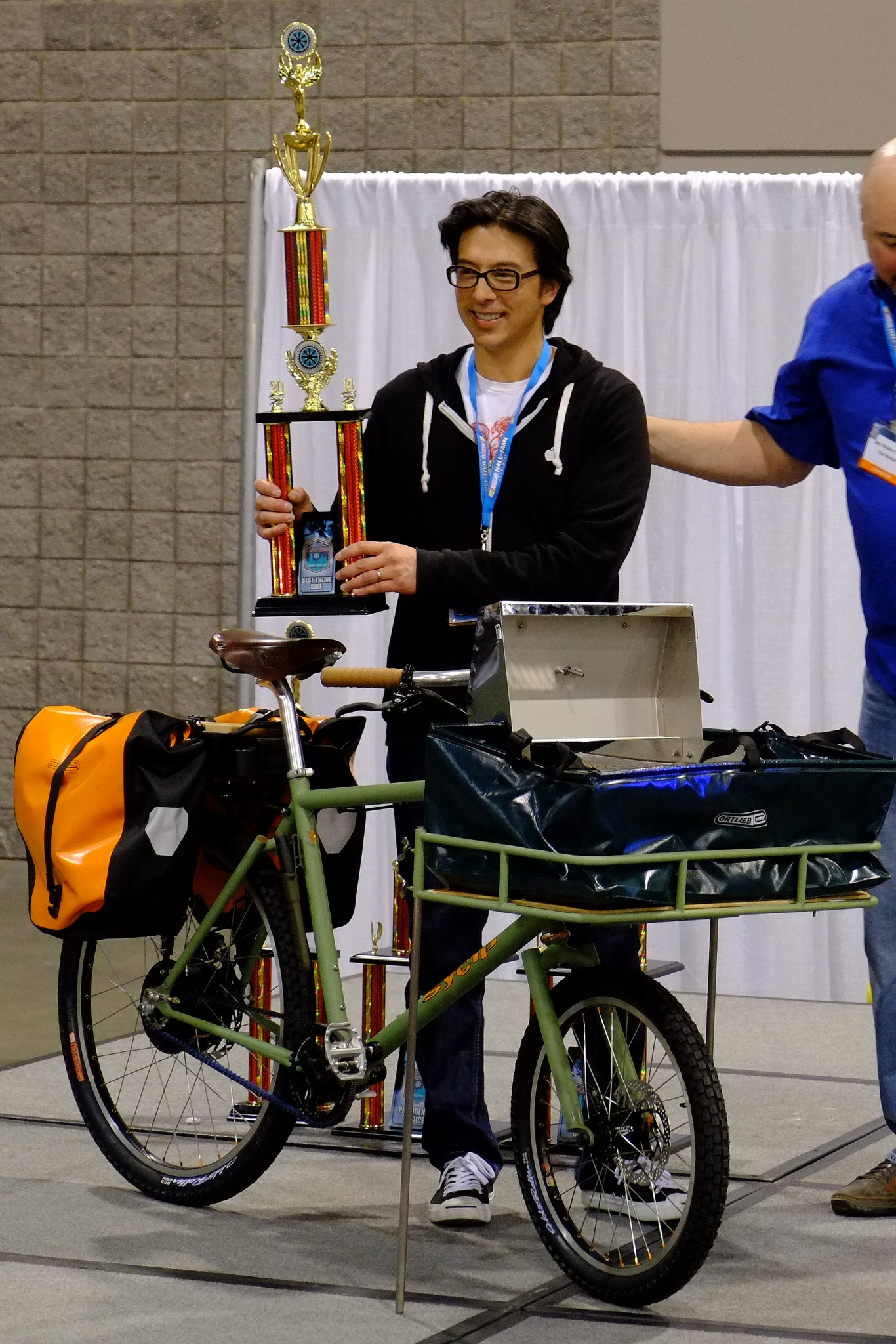 Chris Connor of Connor Wood Cycles is a Denver-area bike builder who honed his woodworking skills as a guitar maker. His wooden belt drive bikes are not just beautiful; they’re tough. One was raced in last year’s Leadville 100 mountain bike race. For his SRAM E-matic build, Chris chose to create an efficient hardwood commuter that he is calling the el Woody. His bikes truly are functional works of art. Note the wooden rear rack. 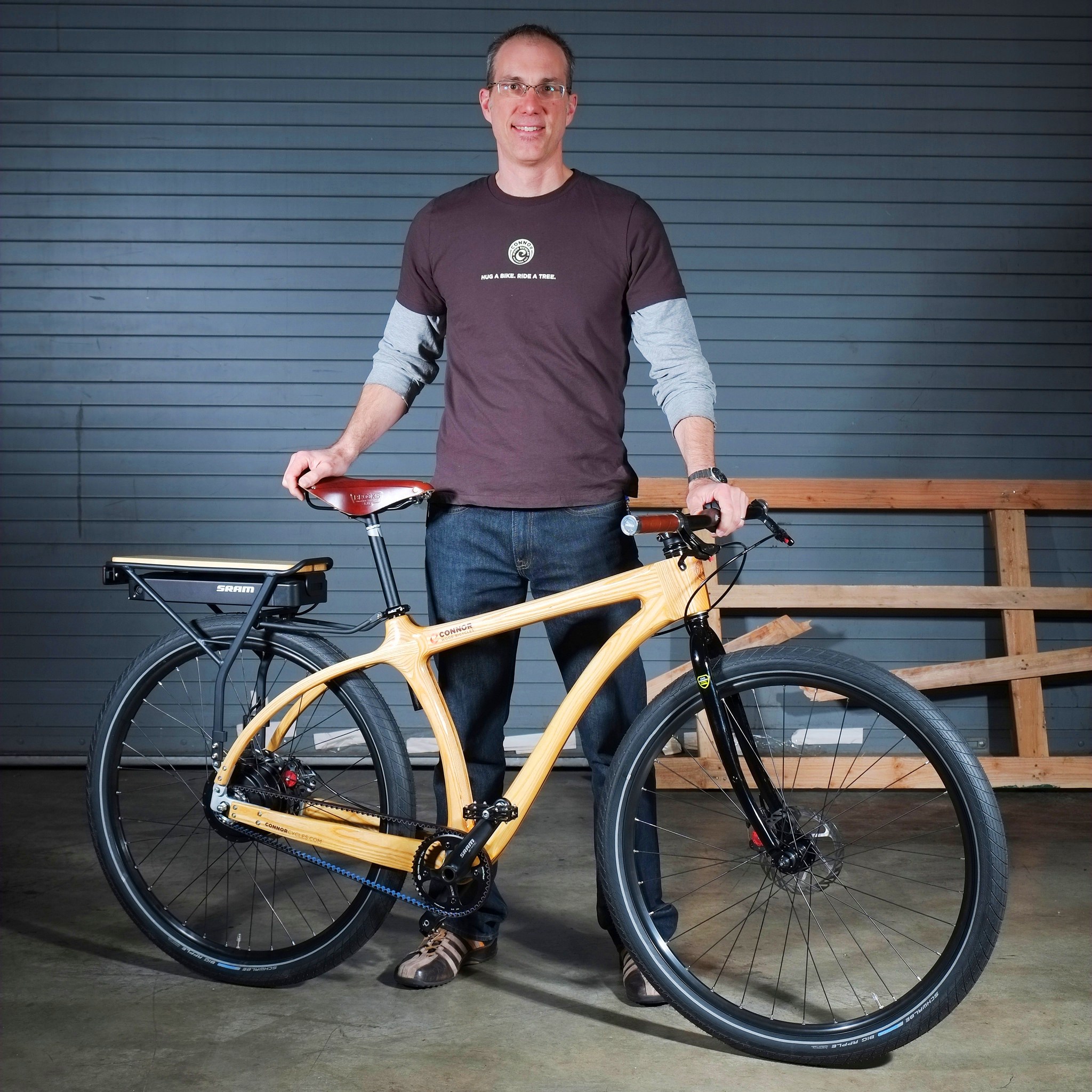 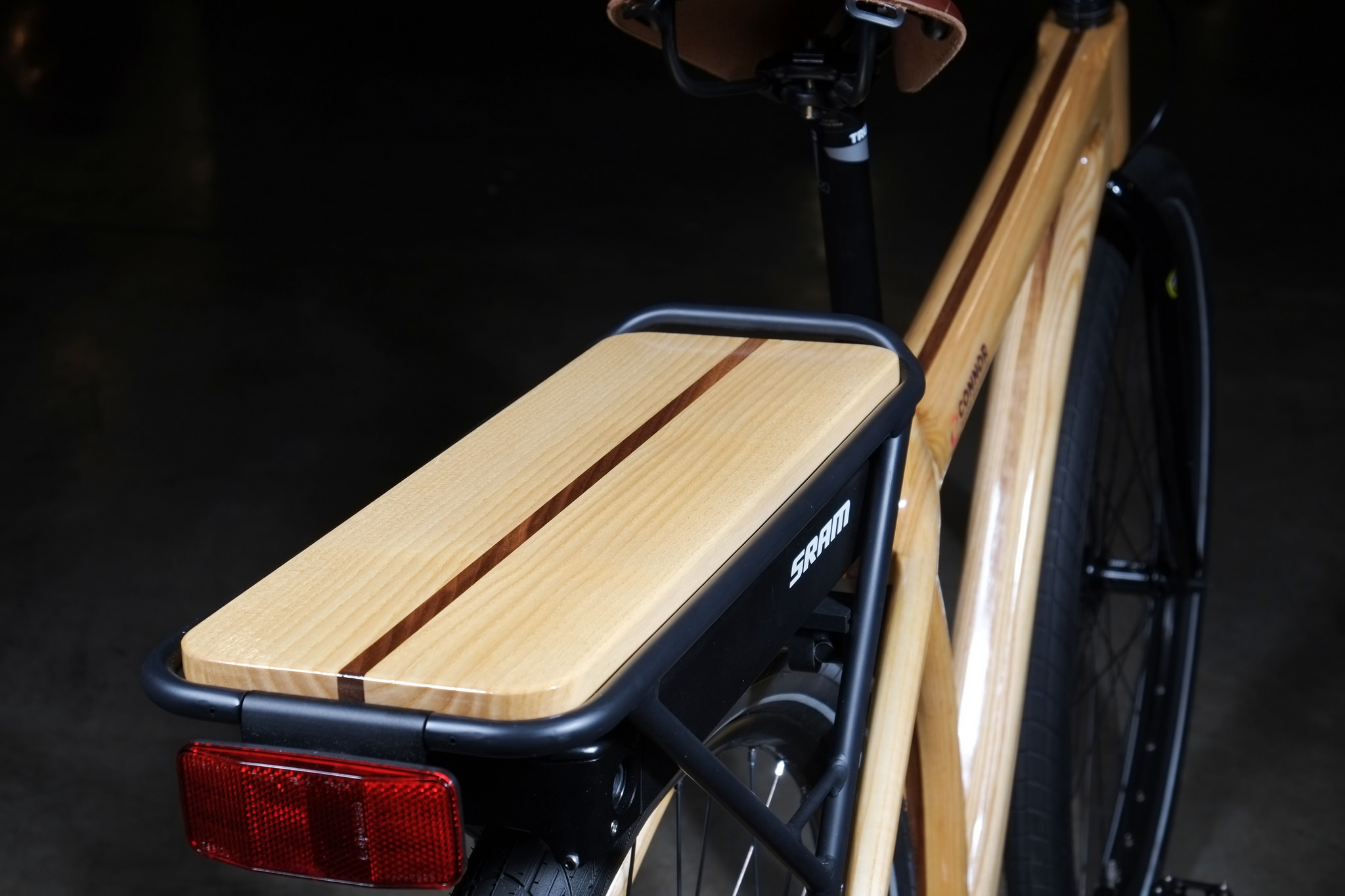 Bamboo specialists Boo Bicycles of Colorado last year launched a commuter line called AluBoo that creatively combines aluminum, bamboo and belt drives. After winning an award last year for best belt drive fat bike, they decided to pair the E-matic with an AluBoo frame to create a stylish urban eBike that gets you to the office or grocery without arriving sweaty. Booyah! 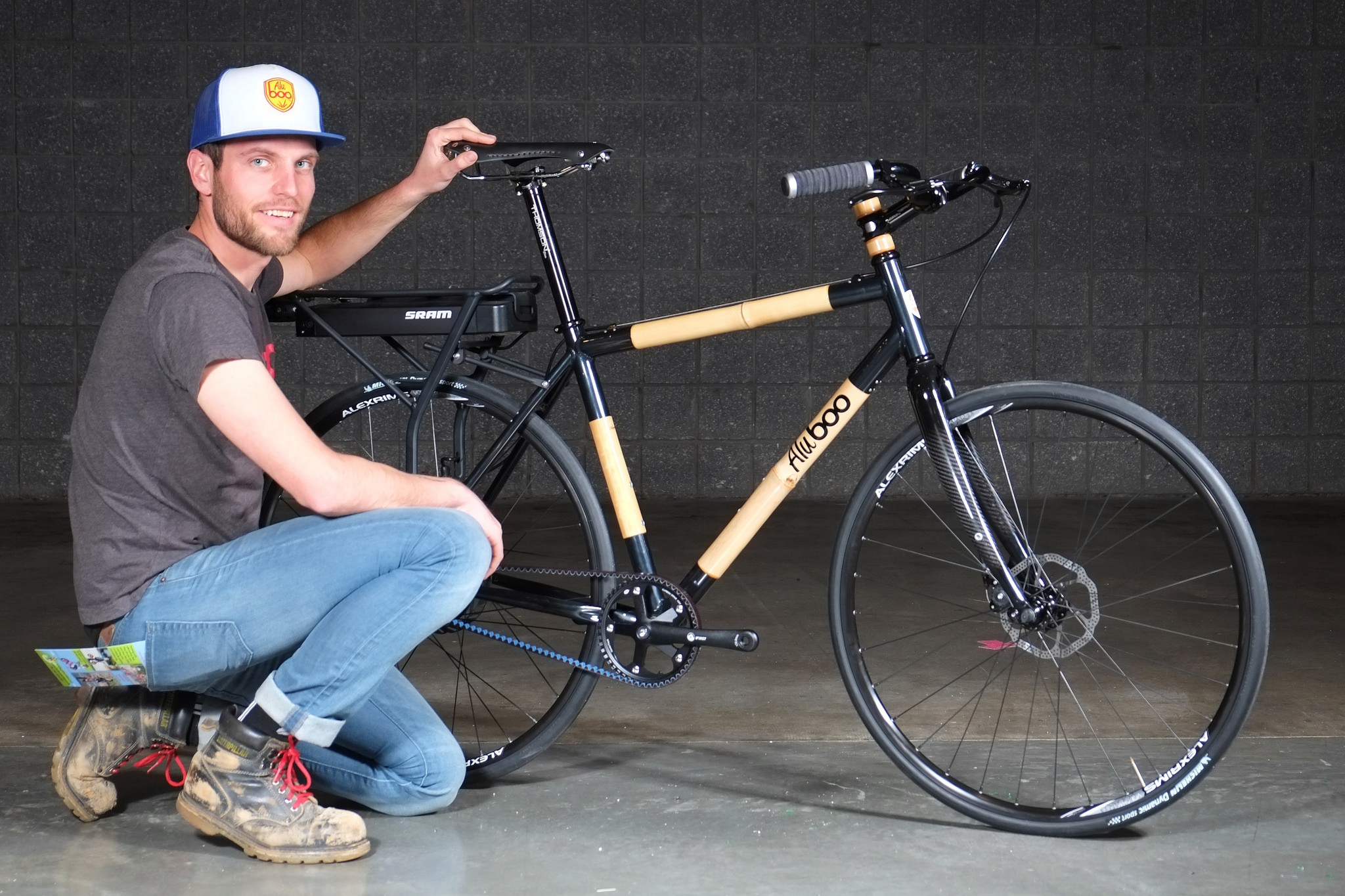 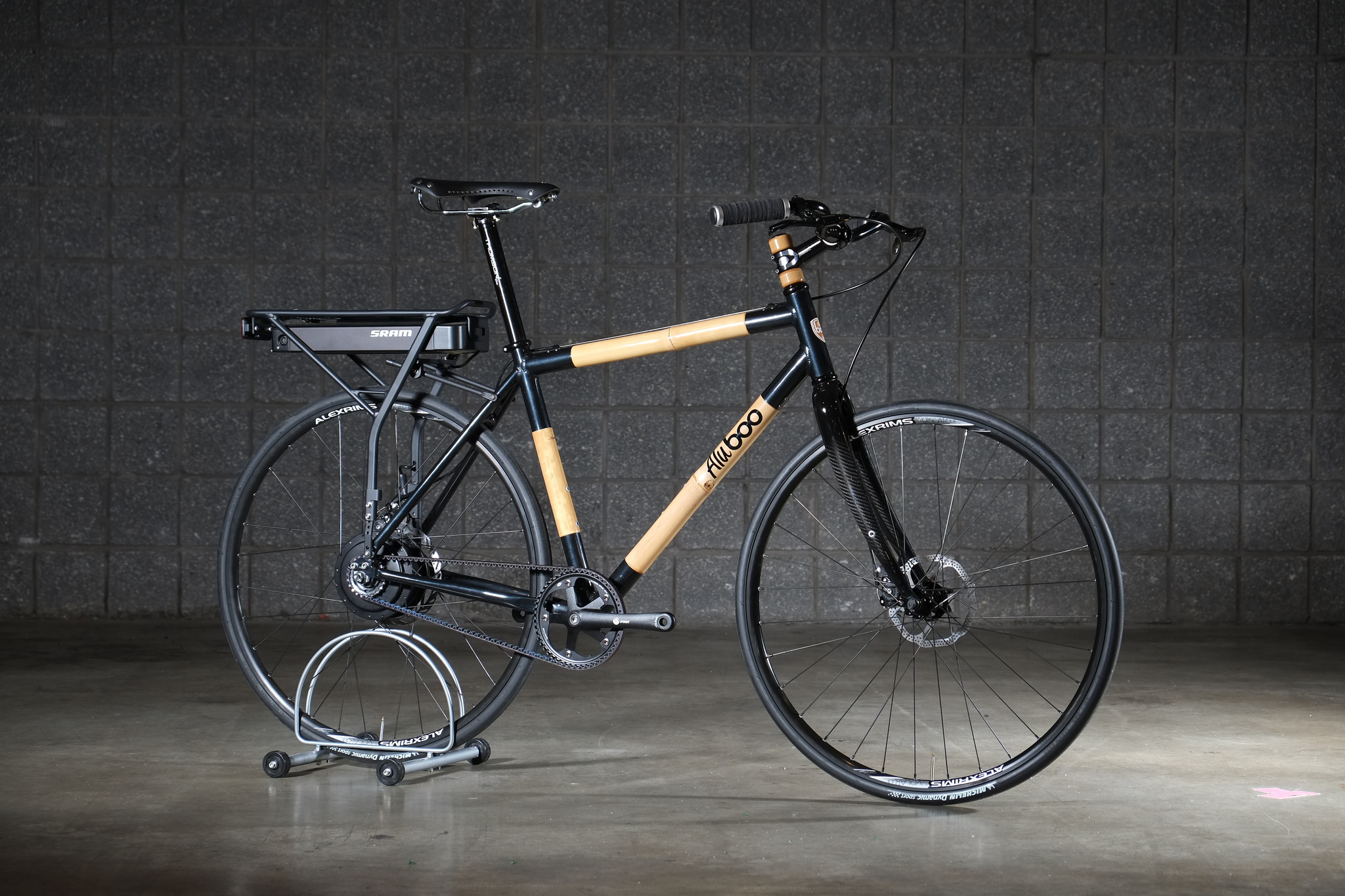 One of the hardest bikes to keep in the Gates booth in Charlotte was the CityView eBike from Co-Motion, which took top honors at NAHBS last year for its electronic shifting city bike.Co-Motion told us to offer test rides, and many NAHBS attendees accepted. The pedal-assist bike could frequently be seen zipping along a rear wall of the convention center with a long straightaway. Everyone was impressed by the E-matic. The rear wheel drive features a torque sensor that automatically shifts into a higher gear. It’s a clean application: no handlebar shifters or extra wires–just pedal and go. 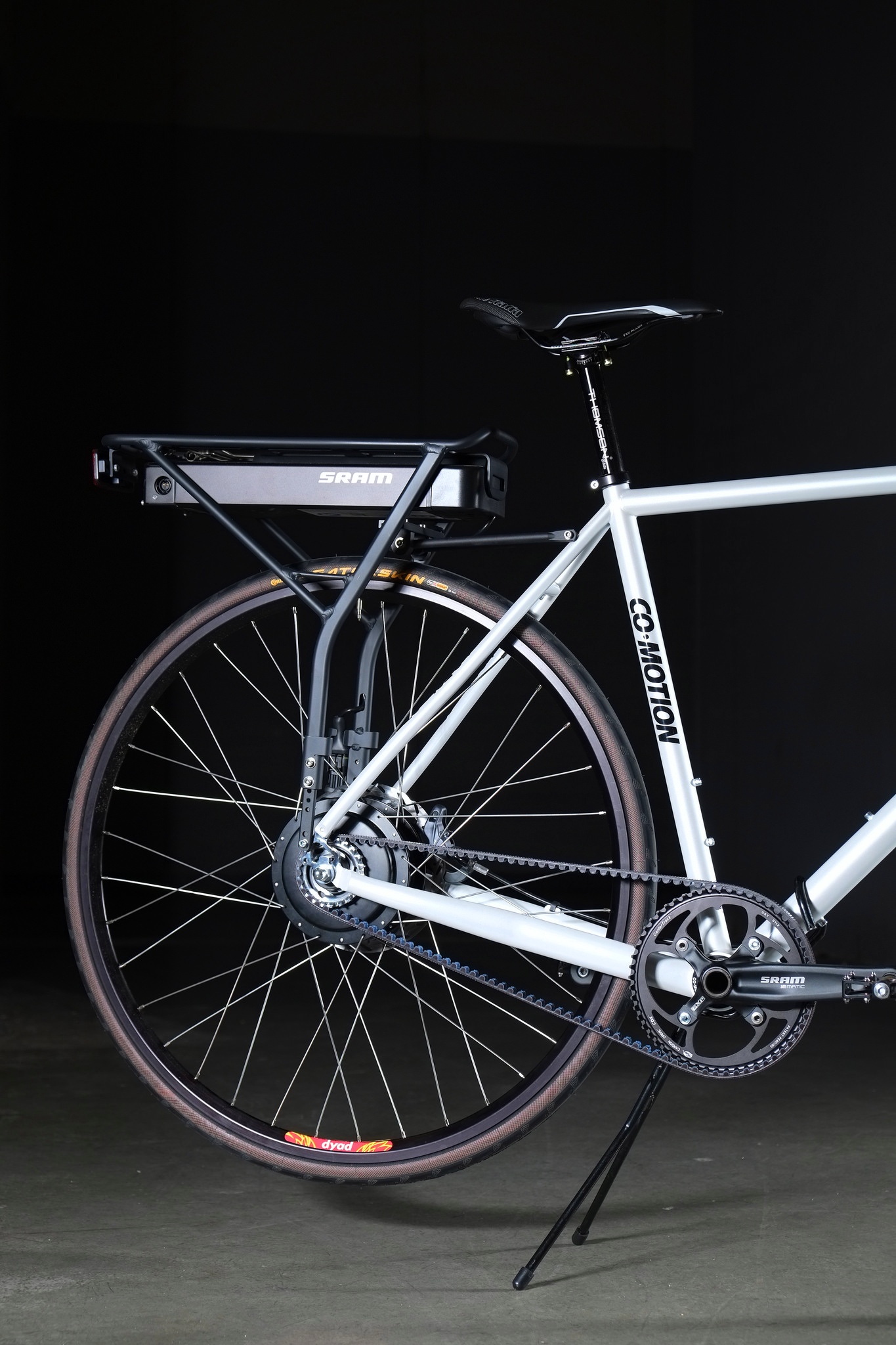 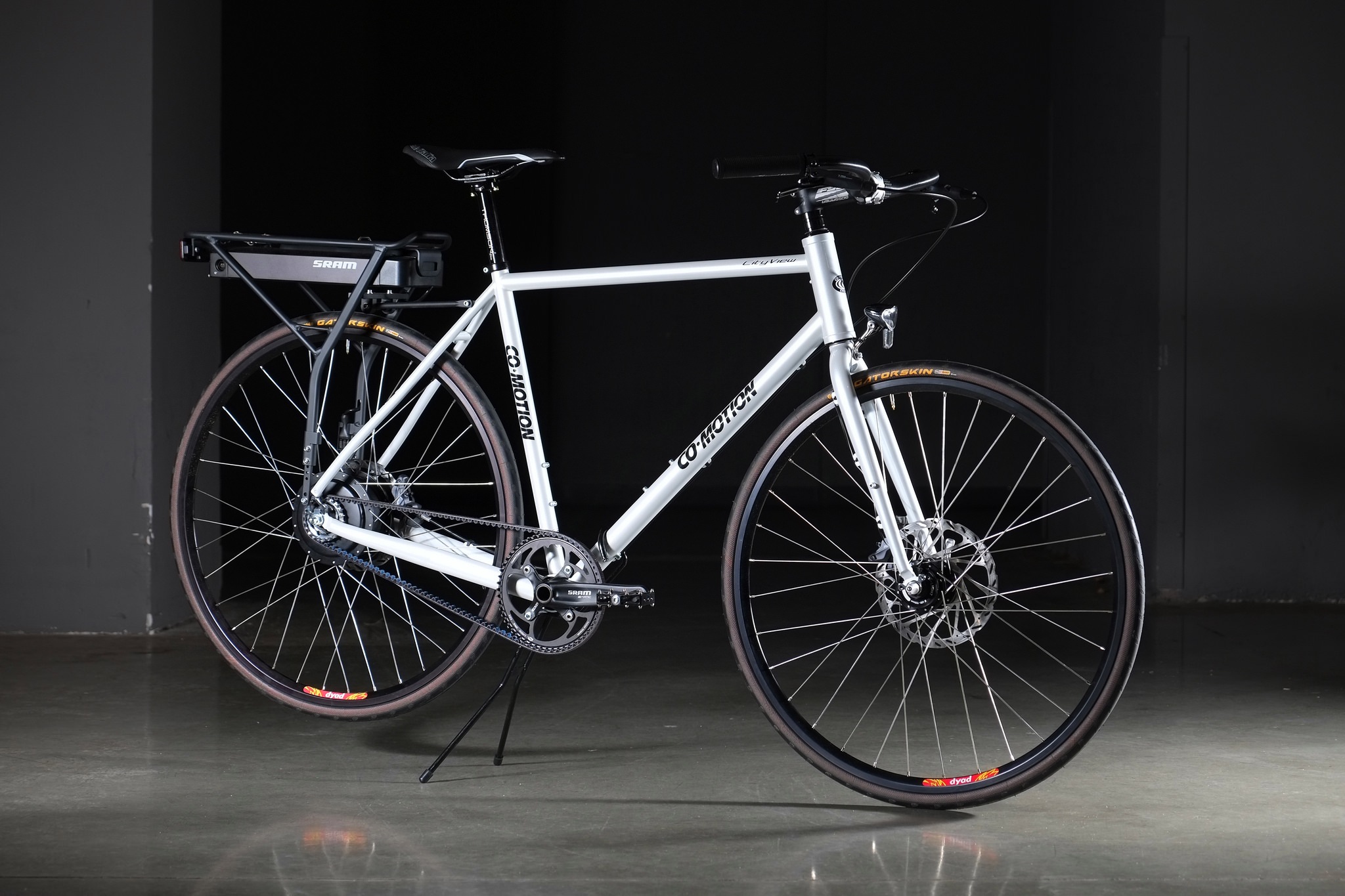 Builder Craig Calfee has won many awards for his high-end carbon bikes, but he is also noted for his efforts to teach bamboo bike building skills in Africa. His goal is to help people in the developing world use locally sourced bamboo to create affordable and clean transportation. For his show bike, Craig paired the E-matic with a Booganda frame. Note the beautiful work on the head tube. 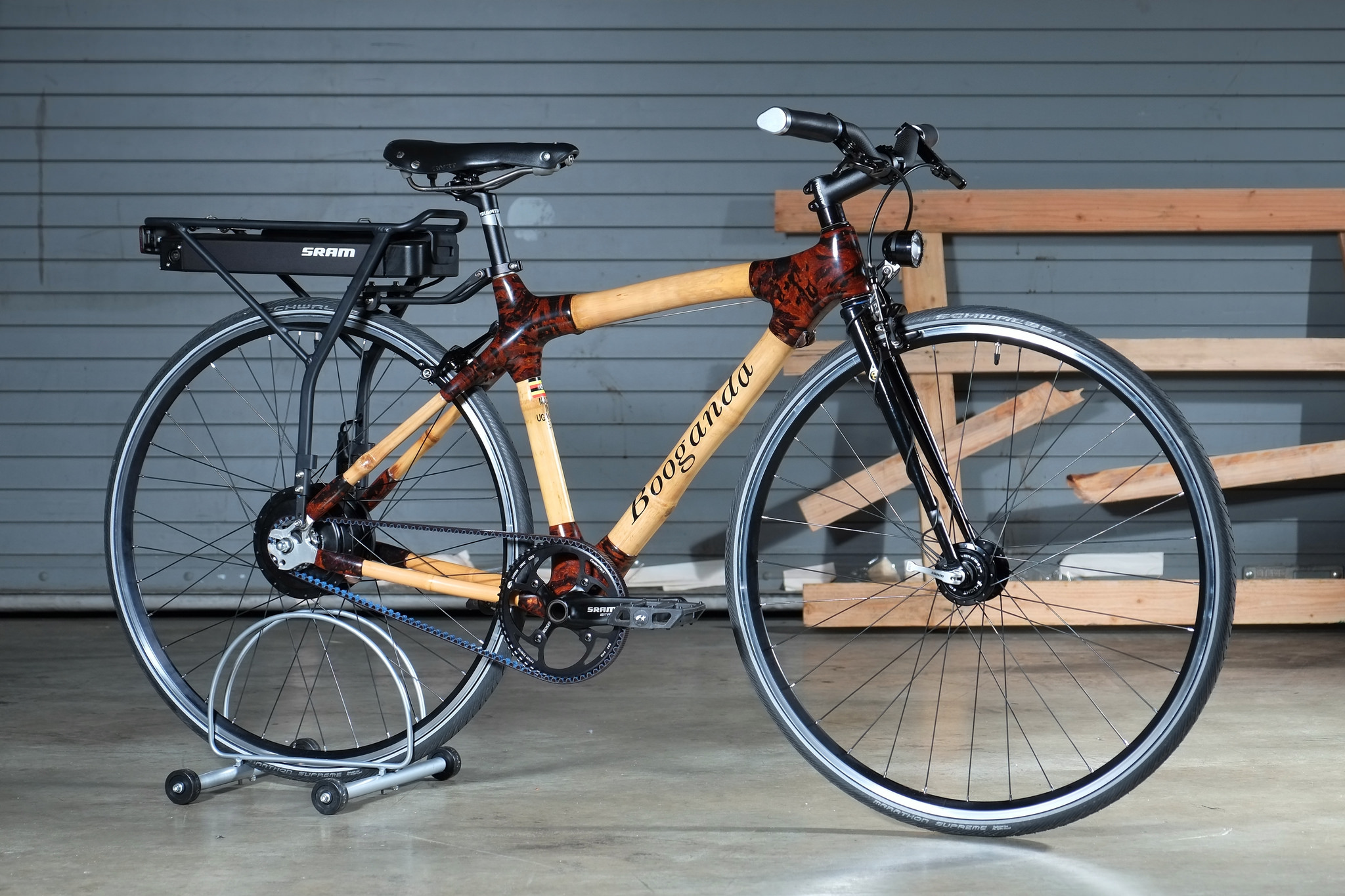 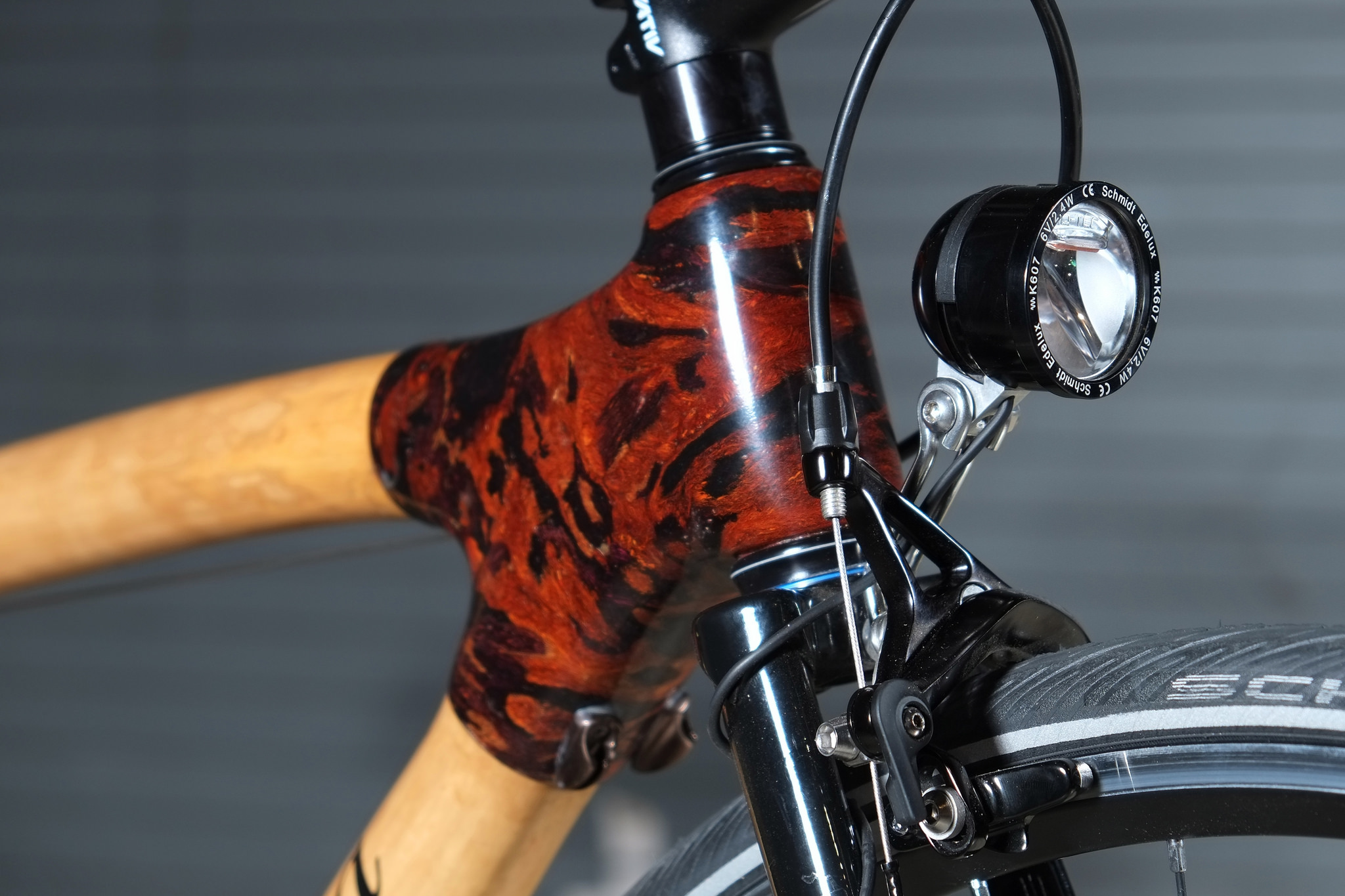 Stay tuned for more great photos of electric and pedal bikes from NAHBS. Thanks to Gates racer/marketing specialist/photographer Tim Lucking for the pictures. Now it’s time to go barbecue. 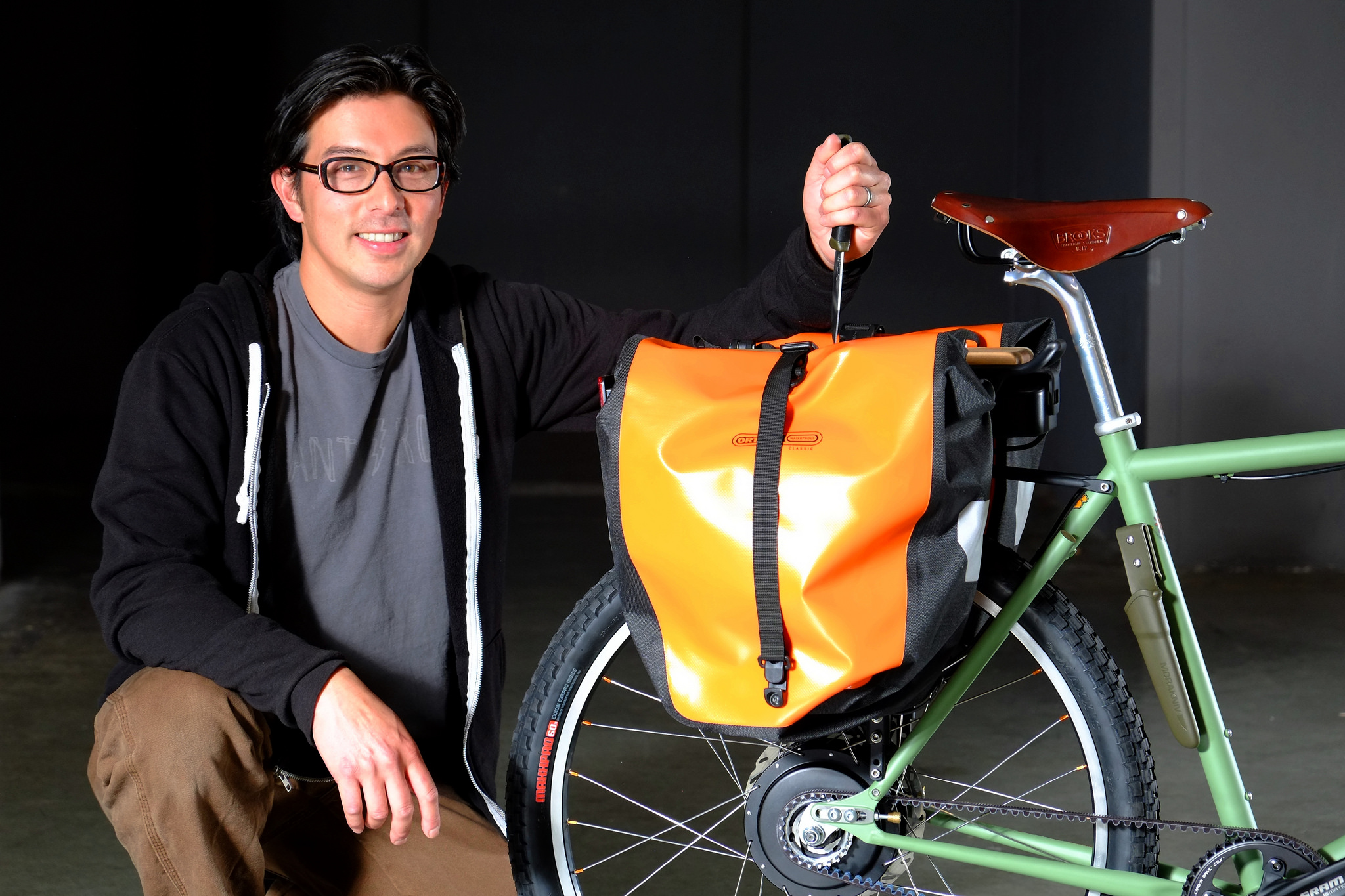