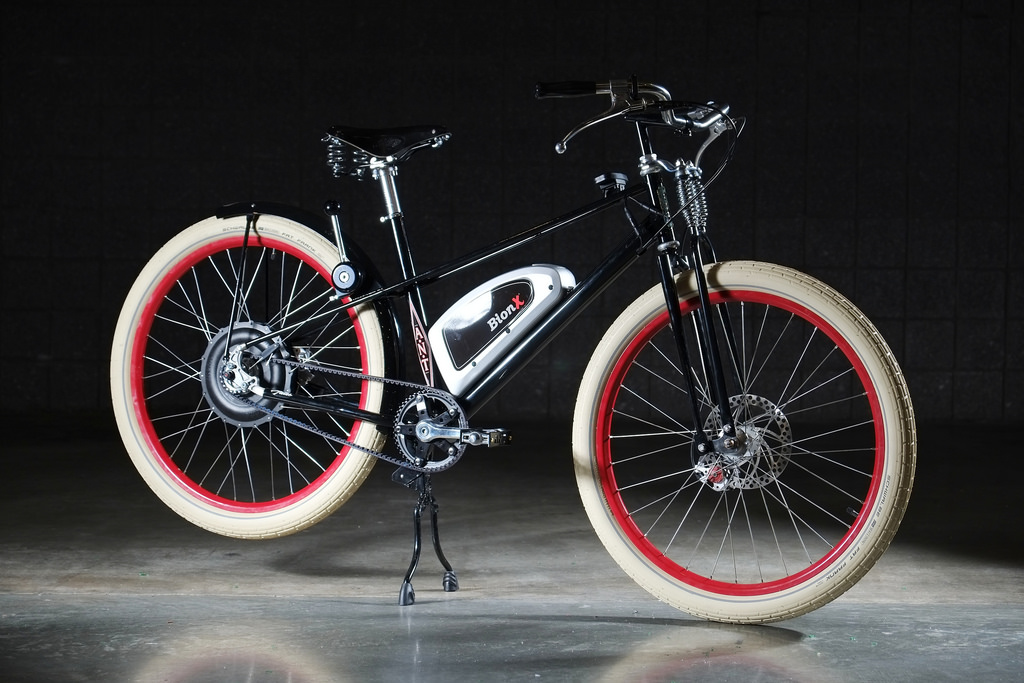 Pictured above and below is a retro cruiser from ANT Bikes in Walpole, Massachusetts. ANT specializes in steel transportation bikes that often use Gates Carbon Drive. “The bike was designed to have the look and feel of a 1930s-era motorbike,” says ANT owner Mike Flanagan. It features a sprung fork and stick shift mounted to the seat stay, along with a twin tube frame. Other nice touches include red rims paired with Fat Frank cream tires, a Brooks saddle, and moto-style brake levers. Cables are routed internally for a clean look. “We were very pleased with the outcome and received lots of reviews at NAHBS,” Mike says. “Thank you to everyone at Gates for inviting us to participate.” 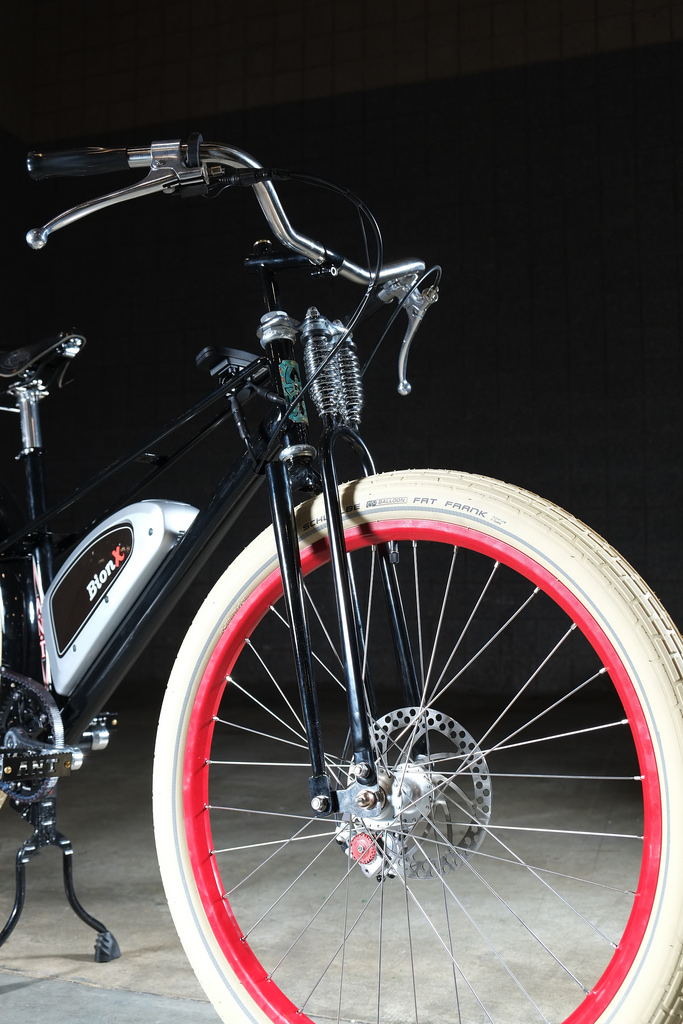 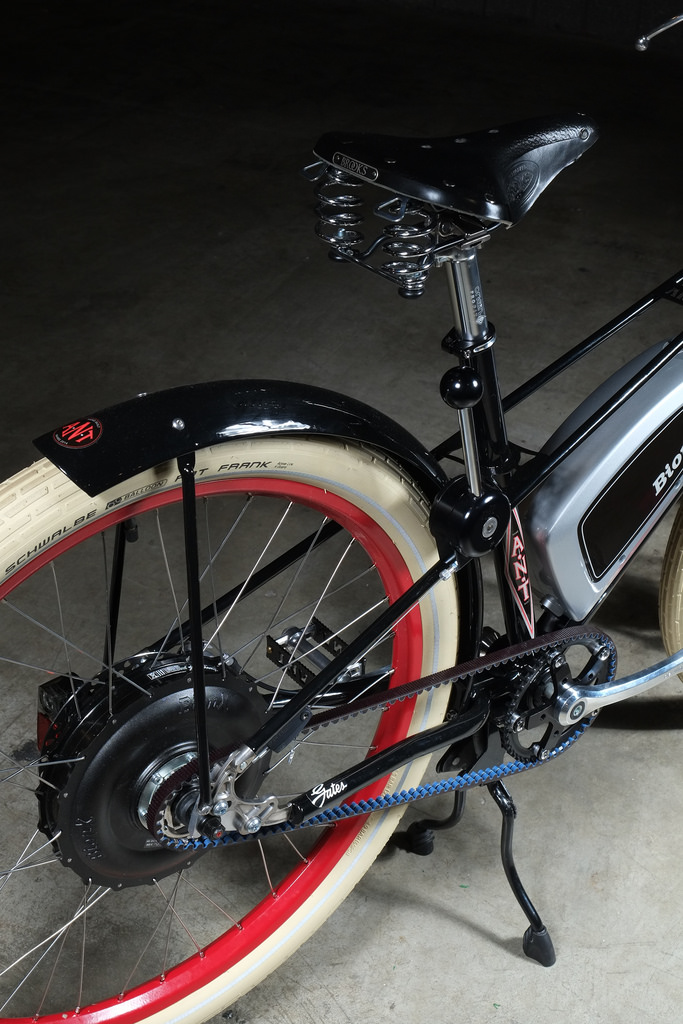 Below is a double-belted electric tandem from Santana Cycles that is worth not one but two smiles.

Santana builder Bill McCready says that “couples who adopt a healthy tandamine lifestyle when younger will continue to ride enthusiastically for decades. They won’t willingly ‘hang it up’ until they lack the strength to make it to the top of a once-easy climb.”

That’s where the pedal assist BionX comes in. Couples who no longer have the legs for big climbs can benefit from the rear hub motor’s “inconspicuous boost to help them reach the high points.” And thanks to the two Gates Carbon Drives instead of chains, this bike is clean, quiet and low-maintenance. 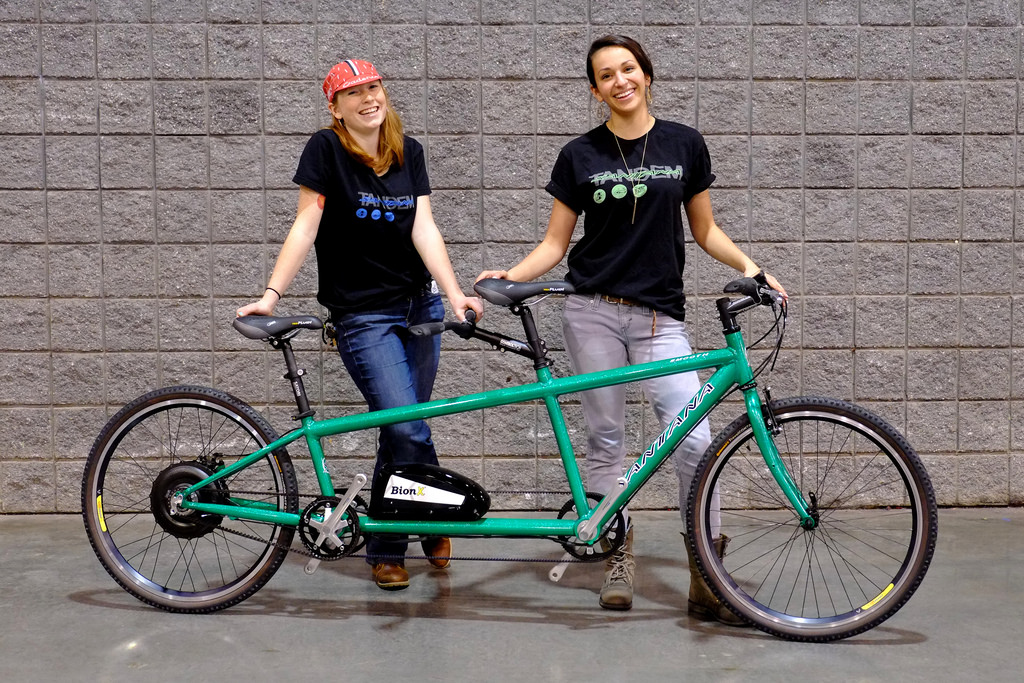 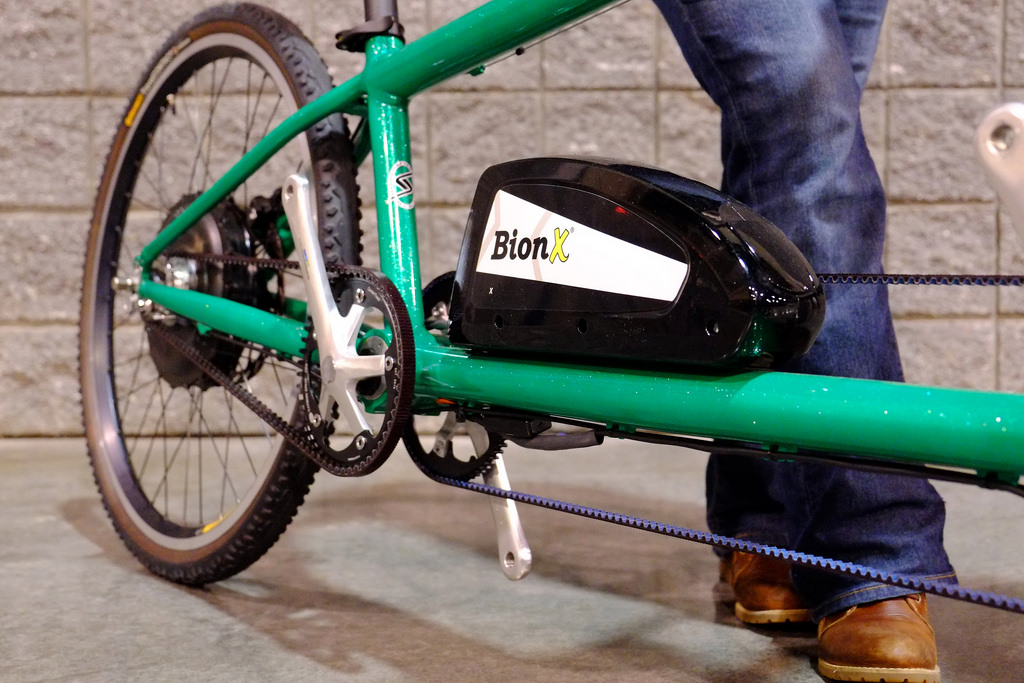 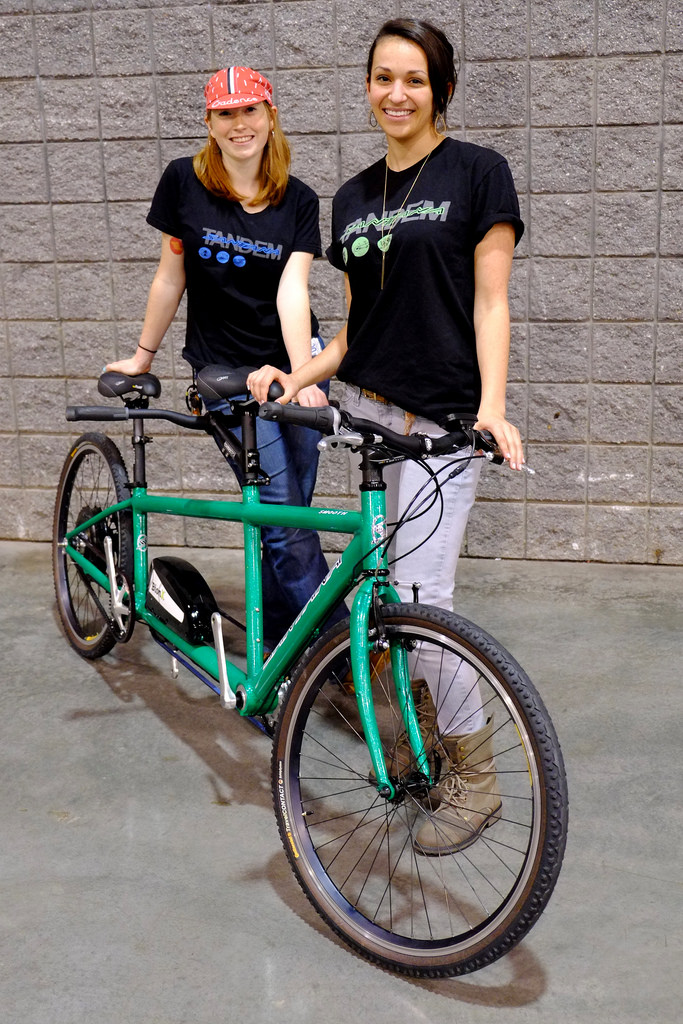 Next is the electric belt drive Green Arrow mountain bike from Ti Cycles in Portland. They won an award for best cargo bike at NAHBS last year. 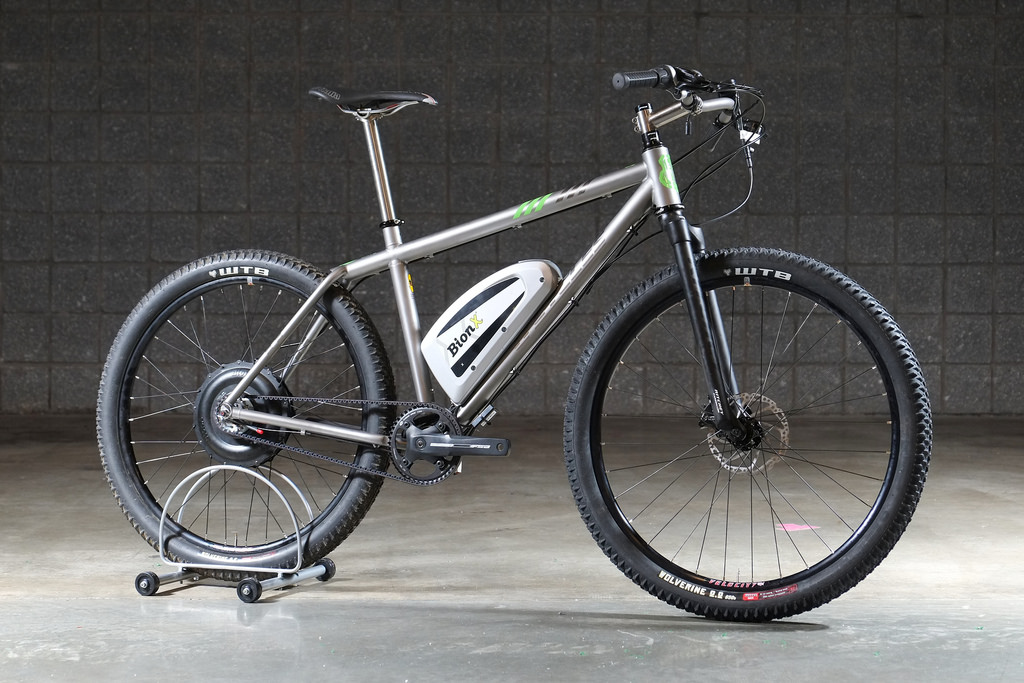 The Green Arrow features a 26-inch rear wheel and a 27.5/650b on the front. The larger front wheel increases the angle of attack on bumps and obstacles, making it easier to roll over rocks, while the smaller rear provides a shorter wheel base and faster acceleration. “This frameset is built from our custom 3/2.5 blend lightweight titanium oversize tubeset and gives the commuter-oriented BionX system a chance to go out and play in the dirt,” says founder Dave Levy. “One of the frame’s most striking features is our distinctive pierced top tube, which runs as one continuous piece from headset to rear tire, pierced by the seat tube.” Belt tension is provided by an eccentric bottom bracket to keep the rear dropouts elegant and simple. 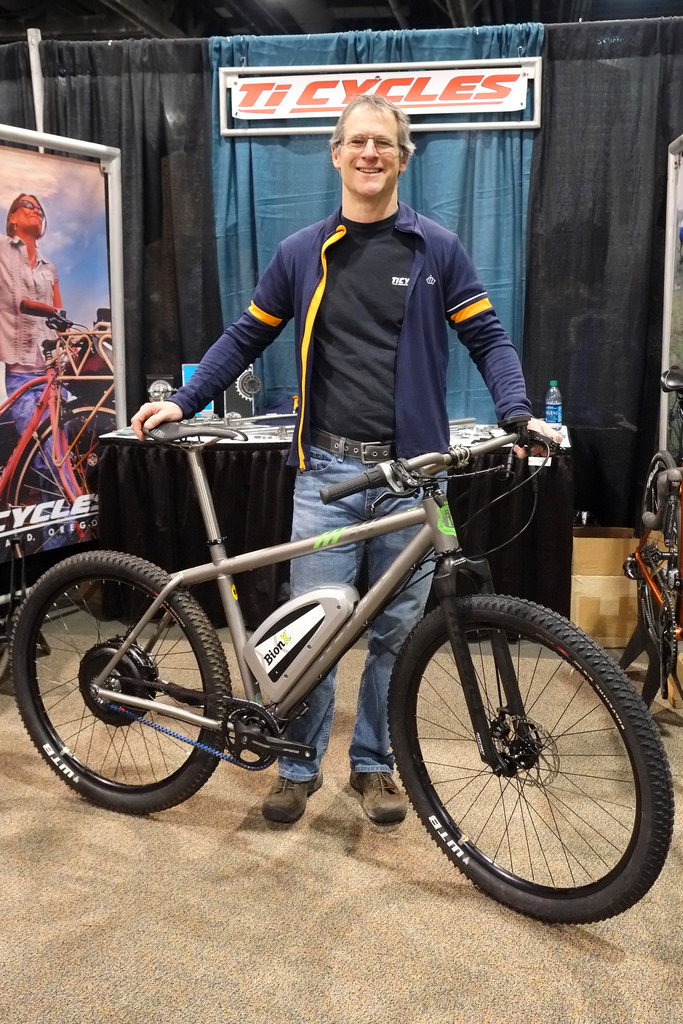 Thanks for following our coverage of the Gates Custom eBike Showcase. In coming posts we will feature belt drive bikes featuring Shimano’s Alfine Di2 electronic shifting system, and other innovative and artistic belt drive bikes from the NAHBS show floor. Thanks to Tim Lucking for the photographs.