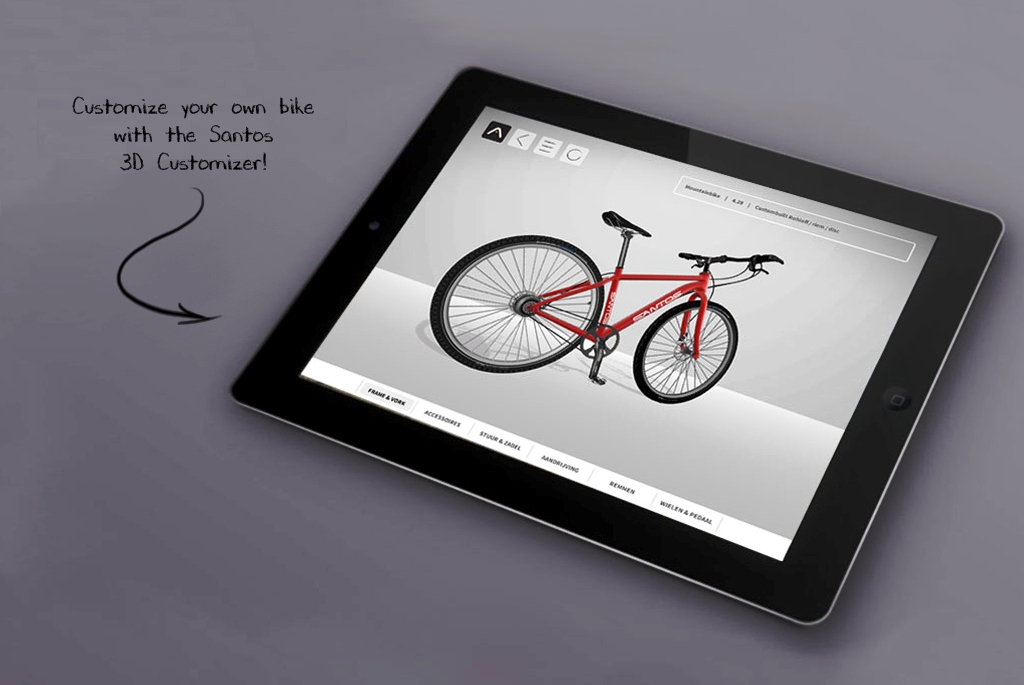 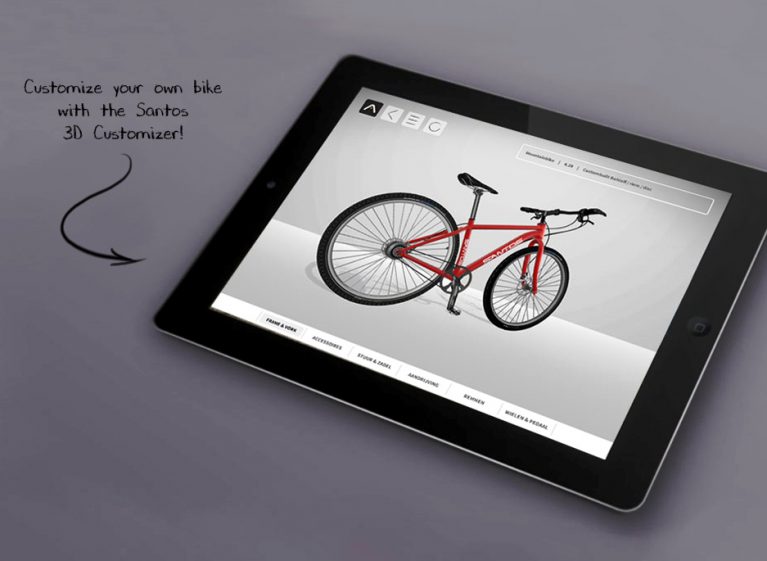 Santos Bikes is a Dutch bike brand and belt drive specialist that has introduced what may be the bicycle industry’s most advanced 3D customization app. The Santos 3D Customizer app allows customers to visually preview their virtual bike in three dimensions, zooming in and out and rotating it to scrutinize every detail from all angles. Users can test out a wide variety of frame and decal colors, choose saddle styles and colors, add different types of wheels, add or subtract front and rear racks and carriers and a choose a colored dynamo hub to match. We’ve tried it, and it’s pretty cool.” Every cyclist is unique. That’s why Santos specializes in building custom-built bikes,” says Santos founder Robbert Rutgrink. “Colors are one of the most difficult choices. The 3D app gives people the opportunity to play with all variables and try out many combinations until they find the perfect match.” The 3D Customizer is available for iPad, Windows and Macintosh OS X. The 3D app is the latest innovation from Santos, which Rutgrink founded in a work shed in 1997. Today, Santos is best known for its premium travel bikes, which are a favorite of global trekkers and adventurers such as the Bicycle Junkies,who have ridden more than 20,000 kilometers through the Americas on their Carbon Drive equipped Santos Travel Lites. In 2009, James Bowthorpe made his record-setting ride around the world on a Santos with a Gates system. Santoshas grown considerably since those early days in the shed. In 2014, the company moved into a large new headquarters in Nieuw-Vennep, close to Amsterdam. The new Santos HQ has a large showroom and a Demo Center with a big fleet of belt drive (“riemaandrijving” in Dutch) test bikes. The Demo Center is open every Friday for appointments and test rides, and it has one of the world’s largest fleets of test bikes equipped with the Gates belt system.

Santos offers many bicycle styles in addition to their well-known Travel Master series. The Lite series (including the Race Lite below) consists of fast and light road bikes featuring Rohloff hubs instead of derailleurs and Gates belts for low maintenance. Santos also offers Urban, Mountain, Tandem and eBike lines. Download the 3D app for iPad, Windows or Macintosh OS X, and schedule a demo appointment to test out and build your dream “riemaandrijving” bike. santosbikes.com