Priority Bicycles is a new commuter-focused brand that has found rapid success by rethinking how bikes are conceived, designed and brought to market. “Our success has been driven by a combination of technology, design, and understanding essential customer needs to deliver hassle free, high quality bicycles at a fraction of traditional prices,” says Dave Weiner, founder and CEO of NYC-based Priority. Its bikes use no chains or derailleurs and are optimized for simple, low-maintenance urban riding. Priority launched in 2014 on Kickstarter with a goal of raising $30,000 and instead raised more than half-a-million dollars.

Priority has just launched a new premium model, the Eight, featuring Gates Carbon Drive. Impressively, the Eight is selling for a special launch price of $799, making it the most affordable commuter bike with Gates Carbon Drive in the United States.

The Eight has an alloy frame and a component package that includes an eight-speed Shimano Nexus internally geared hub, hydraulic disc brakes, fenders and Gates Carbon Drive’s CDN belt system. CDN, which is designed for urban riding, features Gates’ patented CenterTrack design and an engineered polymer belt embedded with carbon fiber cords. The front sprocket is made from reinforced composite embedded with glass fibers, and it comes integrated with a Gates branded crank for industry leading concentricity and easy installation. The rear sprocket is wear-resistant steel.

Weiner says customers were clamoring for a model with Gates Carbon Drive, the global leader in bicycle belt drives.

“The endless requests that we received for this bike had been overwhelming. We couldn’t ignore the call,” he says. “Riders wanted what we stand for – hassle free, great quality, unmatched value – in a package that could support performance, more mileage, and increased agility.” 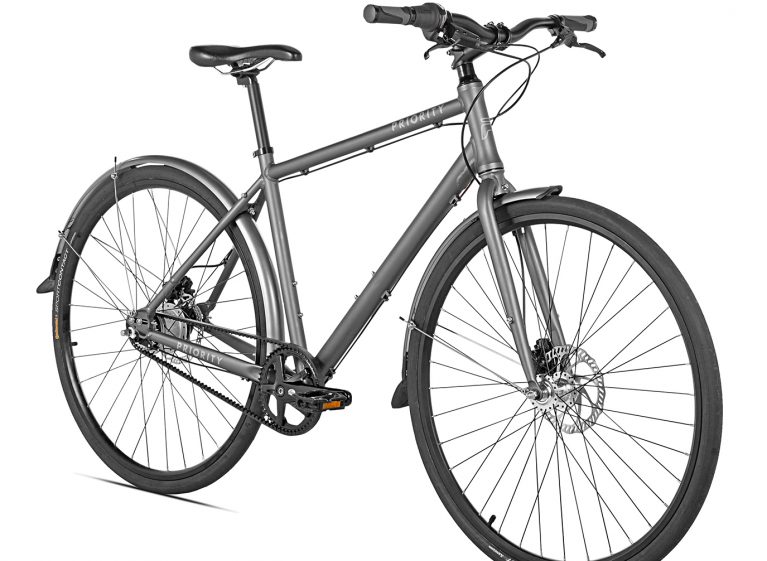 “Gates is very pleased to be working with Priority and to have Carbon Drive featured on the Eight,” says Todd Sellden, global director of Gates Carbon Drive. “Priority is a smart and ambitious young company that has found a way to offer affordable and fun city bikes that simplify bicycling and allow people to enjoy the ride and spend less time maintaining their bikes.” prioritybicycles.com