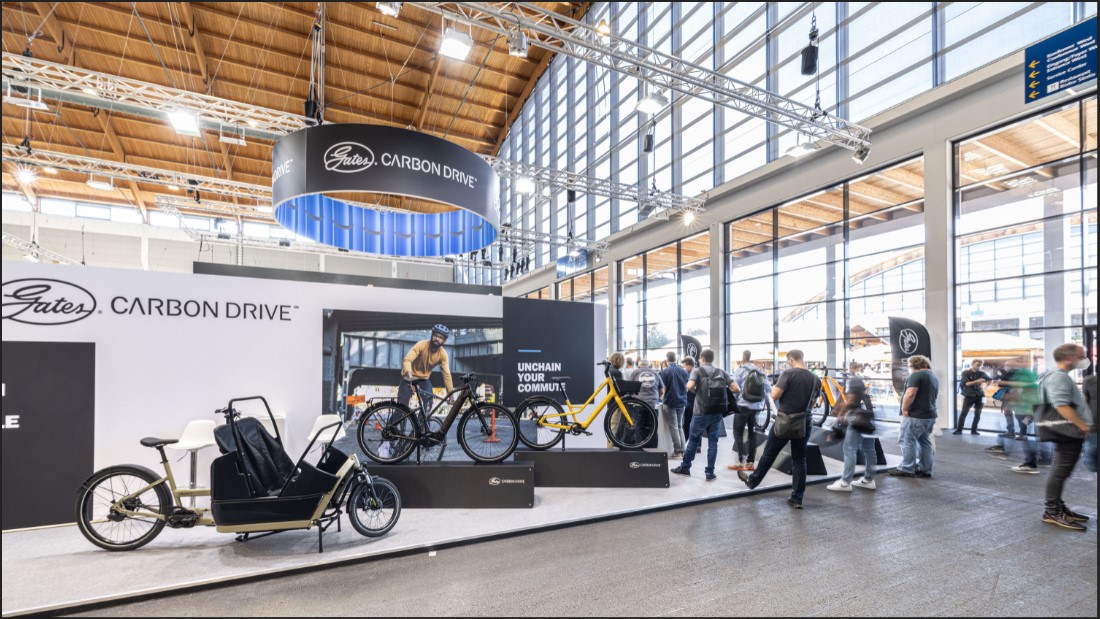 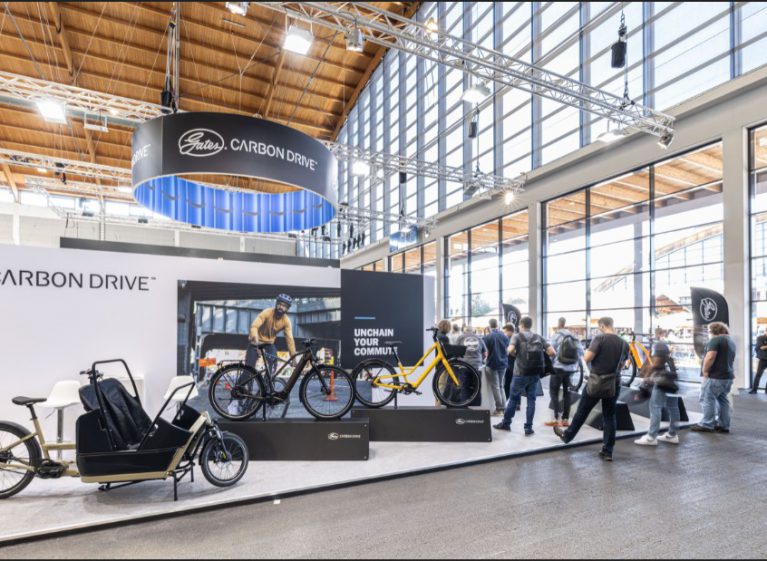 After a one year absence, Eurobike returned to Friedrichschafen, Germany from September 1st to 4th, 2021. The world had changed radically in 2020, with many people rethinking the way they get around cities. Eurobike was thus the perfect opportunity for Gates to show off our innovative belt drive system for bikes and spearhead the micromobility revolution.

The belted bikes on display came in all sorts of applications, shapes, and sizes like city bikes, mountain bikes, cargo bikes, and e-bikes. There were exhibitors and media from all over the world – check out this article from China which features an interview with Jonathan Weinert, Strategic Marketing Director of Gates Mobility. Eurobike perfectly demonstrated the versatility of Gates Carbon Drive, with three Gates belt-driven bikes winning awards from the show.

This stunning Evari 856 from the UK is a high-end all-terrain pedelec. For weight reduction purposes, the bike has a monocoque carbon-fiber structure and for aesthetic reasons, all the cables are internally routed. The 856 won the Start-Up Winner award, with one of the judges proclaiming: “It’s like driving a Porsche.”

The Coleen Modern DB is a pedelec featuring a directly integrated Pinion gearbox and of course, a Gates Carbon Drive belt. It weighs just 22 kg, is made of carbon fiber, and packs a 750W motor – don’t be surprised if you need a pilot’s license to ride this beauty. The Modern DB won in the e-bikes category.

Back in 2014, the Nuseti featured the innovative Inner Driver System (IDS). The drivetrain – a chain coupled to a 16-speed planetary gearbox – was enclosed within an oil bath, which protected it from the elements. In 2021, the IDS is still the Nuseti’s calling card, but the bike now uses a Gates Carbon Drive belt.

A Nicolai EBOXX Ultra is a guaranteed head turner. Look how aggressive it is. It isn’t even an e-bike – it’s an e-motorbike.

This post was just a sampling of the many bikes we displayed at Eurobike 2021. Stay tuned for more posts about the full spectrum of bikes we had on display, and the next time you’re in the market for a new bike, consider getting a bike with a Gates belt drive. You won’t regret it.

Click here for part 2 in this series, which covers the belted e-bikes at Eurobike 2021.