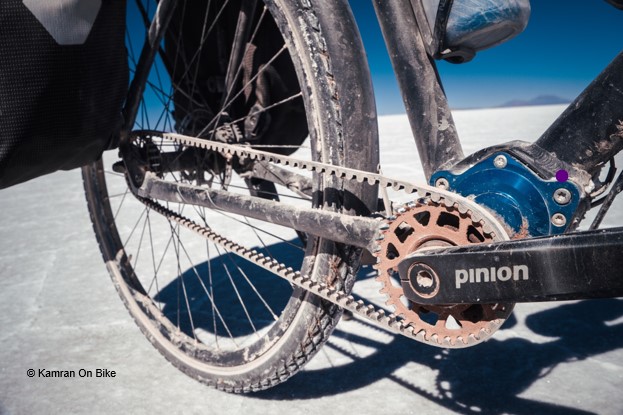 Kamran On Bike’s Story of the Gates Carbon Drive Belt

This post is not yet another review of the Gates Carbon belt drive with a list of pros and cons. There are plenty of them on the web already. Instead, it’s a personal story of a belt that played a key role in driving the biggest adventure of my life.

20,000 Miles From Argentina to Alaska

In 2016, I embarked on a bicycle trip across the Americas. Standing at the end of the road in the world’s southernmost city in Argentina, some 33,000 km (20,500 miles) lay in front of me. As I took a deep breath and took my first pedal stroke on a bicycle equipped with an internal gearbox and Gates Carbon Drive belt, I was not so confident if my bike or I would hold up for so long! After all, I had never used this drive system before.

After crossing numerous mountain ranges, deserts, rivers, and borders, I made it to the end of the road in Alaska four years later. Here is the tale of how a carbon belt helped me achieve my dream.

In 2015, I went on a 10,000 km-long bicycle journey from Germany to Pakistan. Back then, my bicycle had a derailleur drive system with a chain. Gears began to wear out after only a few thousand kilometers, and the chain started skipping. I replaced the chain in Iran and continued. But after about two thousand kilometers, it broke on one steep slope in Tajikistan. It took quite some time to find the spare chain quick links in my luggage. Imagine if I had lost it! The nearest bicycle shop was some 200 hundred kilometers away in Dushanbe. Luckily, I also had the chain tool and knew how to use it.

Earlier on this trip, while cycling in eastern Turkey, the cassette froze in the cold weather causing the chain to slip. Throughout this journey, the drive system required regular cleaning and lubrication.

First Sight of the Belt Drive

Later on in my journey, I met a German cyclist on the Pamir Highway riding with an internal gear hub and a Gates Carbon belt. I was familiar with the internal gear system but didn’t know there were bicycles with a belt drive. I was intrigued. The cyclist spoke highly of the belt as I closely examined it. I still vividly remember our conversation at the end of the day’s ride outside a guesthouse in Saray Tash village soon after entering Kyrgyzstan.

A few months later, when I was preparing for a much longer bicycle journey through the Americas, I started looking for a new bike. One day, I stumbled upon a website that showed a bicycle equipped with a Pinion gearbox and Gates Carbon Drive belt. The words of the German cyclist were still afresh in my mind. The new setup was a radical shift from anything I had seen before. It promised to address all issues with the traditional drive system.

My search for a new bike stopped right there, but I needed to test this system. Upon returning to Germany, I went to a bicycle shop in Munich and test rode the Stevens Bikes P18 Lite bicycle. The first thing I was curious to know was if the belt would stretch at all.

So, I hopped onto the bicycle and started pedaling like a mad man on Albert-Roßhaupter street, much to the bewilderment of the shop owner who first thought I was going to run away with the fancy bicycle.

I stood on pedals and pushed hard but couldn’t feel the belt stretching or springing back. It is composed of a plastic exterior with carbon fiber cords inside, which makes it tough under tension. Therefore, it doesn’t stretch under load or over time.

After riding the bicycle for less than a kilometer in Munich that day, I was satisfied. A couple of weeks later, I took a transatlantic flight to Ushuaia in Argentina, where my long ride to Alaska began.

The duo of an internal gearbox and Gates Carbon Drive made the ride smooth and quiet. The belt is silent in almost all conditions. Secondly, it requires zero maintenance. Riding in snowy, muddy, and dusty conditions made no difference. The carbon belt doesn’t rust or require lubrication which means grease and dirt cannot accumulate on the belt. The center track and belt profile keep the mud and dirt away in a self-cleaning fashion.

When I felt that the belt was too dirty, I sprayed water on it. No greasy hands!

My bicycle went from the windy and rainy Patagonia to the driest desert on the planet. It experienced -20°C temperature on rough tracks of the Bolivian Altiplano and then crossed long stretches of the Uyuni salt flat.

It climbed passes up to 5,000-m elevation in the Peruvian Highlands and traversed hot and humid tropical forests of Central America. From the endless sunny roads of The West in the United States to freezing conditions in Alberta and British Columbia to some of the world’s last wildest places, the belt system saw it all. It proved its durability day after day for four years of my bicycle trip from Argentina to Alaska.

The first belt on my fully-loaded bicycle lasted the entire length of South and Central America for a total distance of 18,000 km (~11,200 miles) on all sorts of terrain. The second belt I put on in Mexico didn’t need a replacement.

A carbon belt can last three to four times longer than a single-speed chain. If I were using a derailleur system, it would have needed many chain replacements for such a long trip.

I carried two spare belts on tour as they are not available everywhere. They are very lightweight compared to chains and fold up nicely. I kept them in my front panniers. You have to be careful not to twist or backbend the carbon belts. Other than that, no special care is required. Also, no maintenance means no tools required either.

The only limitation with the belt drive is that one cannot use them on a traditional bicycle with a derailleur system. Belts are only compatible with single-speed hubs and internal gear systems. As the belt cannot be broken and reattached, you need a purpose-built frame with a split to allow the belt to run through the rear triangle.

Whereas gear shifting with the derailleur system was poor in icy conditions, the belt drive system didn’t have this issue. Also, the groove down the center of the belt that fits over the ridges of sprockets ensures no belt skipping.

During the four years of my bicycle journey, there were only three instances of belt skipping, and all happened within ten minutes in a downpour on the Dempster Highway in Canada. The main reason behind it was that the belt was not sufficiently tensioned. Thick mud mixed with small stones caused the loose belt to slide over the rear sprocket. The first two times, I rushed to put the belt back on. But the third time, I washed it off. The method worked, and the belt didn’t skip again.

Now, two and half years have passed since I reached the end of the road in Alaska, but the same belt is still on and has helped me explore some of the remotest parts in the mighty Karakoram mountains of Pakistan.

For my long-distance bicycle tour, I needed a robust drive system. And I found it in the form of an internal gearbox and a belt. Gear shifting or maintenance is no longer on my mind. My entire focus is on reflecting upon the encounters, connecting dots in life, and absorbing lessons from the stories I have lived. My bicycle and I become one on the road.

When your eyes are on the road leading to the horizon, and you are thinking of nothing but dreams, that’s when the real magic happens.

So unchain your drive, and unchain your passion! There is a world out there, with pristine mountains, mighty rivers and oceans, never-ending roads, and vast deserts waiting for you. Once you go and see them, they will change your heart forever.